Forex Analysis & Reviews: Analysis of the trading week of August 8-12 for the EUR/USD pair. COT report. The euro currency found support in the form of an inflation report in the US, and what next? 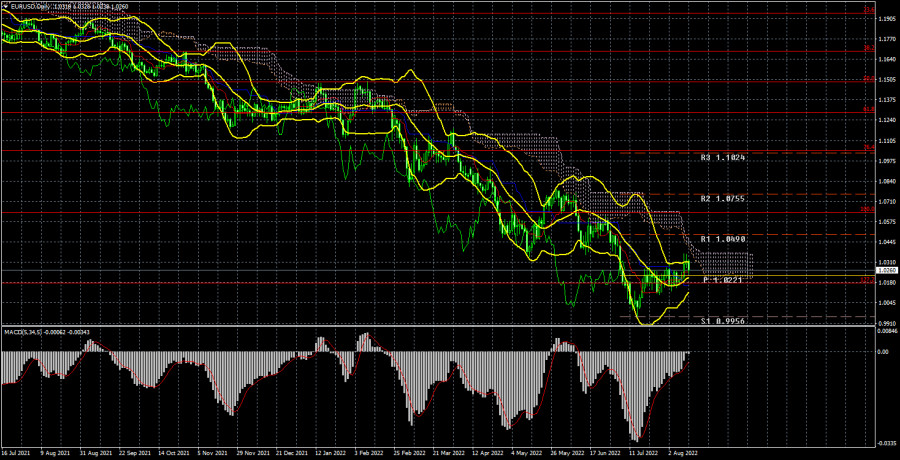 The EUR/USD currency pair has gained about 75 points during the current week. Probably the key event of this week was the exit of the pair from the side channel, in which they spent about three weeks. Almost the only important report this week that contributed to this was American inflation. It is unlikely that the significance of this report seriously surprised anyone, but it should be noted that this is the first serious decline in the consumer price index since it began its growth about a year ago. What does the reduction in inflation to 8.5% mean? From our point of view, inflation has begun the process of decline. It is unknown how long it will take to return to 2%, at what rate it will slow down, and whether it will slow down at all every month (as the Fed wants). And it turns out that the probability of further aggressive rate hikes in the US has decreased, but this report has not changed anything because rates will still rise, and an increase of 0.5% can hardly be called "dovish" or "soft" tightening. Thus, the US dollar remains in a better position than the euro. It's another matter of how the market interprets the inflation report and assesses the prospects for a Fed rate hike. We have already said this week that a turning point may come when the market has already worked out all future rate hikes, and there is no need for them to buy the dollar. From our point of view, this is a rather dangerous moment since it is never possible to say for sure whether one or another long-term factor has fully worked out the market or not. Since the pair is still located below the Ichimoku cloud and has a high chance of a rebound from the Senkou Span B line, we can say from the 24-hour TF that it is too early to think about an uptrend. We believe that the global downtrend may resume, as traders could hardly consider the change in the rhetoric of some Fed members, who have already talked about a total rate hike to 4-4.5% this week.

Over the past six months, COT's reports on the euro currency have raised many questions. The illustration above clearly shows that for most of 2022, they showed a frank "bullish" mood of professional players, but at the same time, the European currency was steadily falling. The situation has changed, but not in favor of the euro currency. If earlier the mood was "bullish" and the euro currency was falling, now the mood is "bearish," and the euro currency is also falling. Therefore, so far, we do not see any reason for the growth of the euro because the absolute majority of factors remain against it. During the reporting week, the number of buy-contracts from the "Non-commercial" group increased by 8.4 thousand, and the number of shorts - by 4.1 thousand. Accordingly, the net position increased by about 4 thousand contracts, which is a meager change for the euro. The mood of the major players remains "bearish." From our point of view, this fact very eloquently indicates that at this time, even professional traders still do not believe in the euro currency. The number of buy contracts is lower than the number of sell contracts for non-commercial traders by 35 thousand. Therefore, we can state that the demand for the US dollar is high, and the demand for the euro is quite low. The fact that major players are not in a hurry to buy euros may lead to a new, even greater drop. Over the past six months or a year, the euro currency has not been able to show even a tangible correction, let alone something more. The maximum upward movement was about 400 points. Over the past four weeks, the pair have just managed to adjust by 400 points. Is the plan completed?

The key event this week was the inflation report, which we have already talked about more than once. Apart from this report, there is practically nothing to highlight. In the European Union, a report on industrial production was published on Friday, which showed an increase in volumes in June by 0.7% m/m, much higher than forecasts. As you can see, this report did not save the euro currency on Friday, as it was getting cheaper most of the day. A report on consumer sentiment from the University of Michigan in the States was released yesterday. It continues to grow after it collapsed to its historical lows near the 50 mark. However, it is unlikely that the strengthening of the US currency can be associated with not the most significant report, which also came out very late. In general, we can say that market participants this week, after the release of American inflation data, started for health and finished for repose. After the dollar's fall on Wednesday, it completely recouped all losses on Friday.

1) On the 24-hour timeframe, the pair continues to trade near its 20-year lows. Almost all factors still support the long-term growth of the US dollar. Traders failed to overcome the Ichimoku cloud, so the upward movement and purchases of the euro currency are still irrelevant. You need to wait at least for consolidation above the Senkou Span B line and only after that consider long positions;

2) The sales of the euro/dollar pair are still more relevant now. The price has overcome the critical line, but it may rest against the Senkou Span B. Therefore, we still expect a new drop with a target of 0.9582 (161.8% Fibonacci).

Price levels of support and resistance (resistance /support), Fibonacci levels – target levels when opening purchases or sales. Take Profit levels can be placed near them;