Forex Analysis & Reviews: How to trade GBP/USD on August 17? Simple tips for beginners. 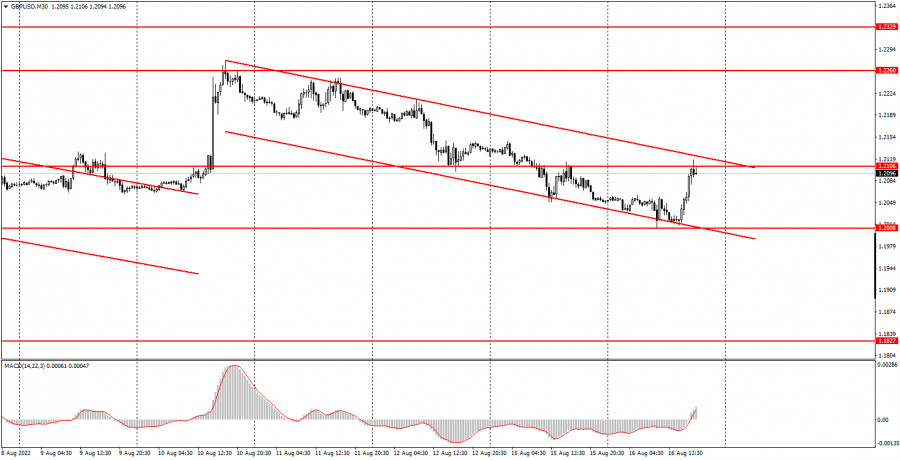 The GBP/USD pair also continued to move down for most of the day on Tuesday. We have changed 1.2033 to the 1.2008 level, from which the price has already bounced. Today, it also bounced off this level, after which it rose to the upper border of the descending channel, as well as to the level of 1.2106. A rebound from this level or line could trigger a resumption of downward movement, which we now consider the most likely for the pound/dollar pair. There were no macroeconomic statistics in America on Tuesday, but there were several interesting reports in the UK. Unfortunately, "just interesting" and not "important", so there was practically no reaction to them, as we warned about yesterday. In general, it is worth saying that the statistics in the UK were not a failure, as wages rose more than expected, and the unemployment rate did not increase by the end of the next month. However, it was difficult for the British currency to show growth on such data. Overall, we believe that both European currencies should continue to fall in the near future, as both have shown only forced growth in the last 4-5 weeks. Most of the fundamental and macroeconomic factors continue to be on the dollar's side. 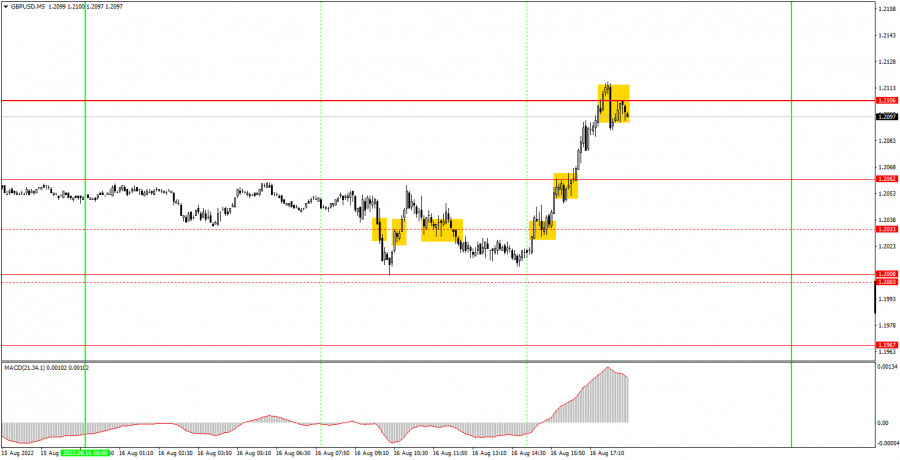 The pound/dollar pair moved very well on the 5-minute timeframe in the US session and very badly in the European one. Let's note right away that at the end of the day we removed the levels 1.2003 and 1.2033 from the chart, and instead of them, now the new level at 1.2008. Unfortunately, it was around the level of 1.2033 that four trading signals were formed today, three of which turned out to be false. Novice traders could try to work out the first two. It was a miracle that the short position avoided a loss, as the price managed to go down 20 points before starting a new round of upward movement. But for a long position, the price managed to go up only 19 points, so traders could not set Stop Loss to breakeven. The third signal to sell should not have been worked out, since the first two near this level turned out to be false. The fourth buy signal should have been ignored for the same reason. The fifth buy signal could have been worked out, but the deal on this signal allowed us to earn no more than 10 points. As a result, all transactions of the day brought the beginners a loss of about 10 points. Not the most successful day, but incomprehensible movements in the first half of the day ruined all trading.

The pound/dollar pair has formed a clear downward trend on the 30-minute time frame, which may continue this week. The channel is quite narrow, and the price can easily leave it. But in general, we believe that the pound will continue to move down in any case, as bulls again showed their passivity in the last month. On the 5-minute TF on Wednesday, it is recommended to trade at the levels of 1.1967, 1.2008, 1.2062, 1.2106, 1.2186-1.2205, 1.2245-1.2260. When the price passes after opening a deal in the right direction for 20 points, Stop Loss should be set to breakeven. A report on UK inflation is set for Wednesday, which may already rise to 9.8-9.9%. It is difficult to say exactly how the market will react to this report and what exactly its value will be, but the reaction must follow, and it can be strong. Then we have a less important report on retail sales in America, but a reaction may follow on it, though not strong.