Forex Analysis & Reviews: EUR/USD: plan for the European session on September 23. COT reports. Euro returned to 0.9813 and is ready to break this level

Several cool market entry signals were formed yesterday, which made it possible to make good money. Let's look at a 5-minute chart and figure out what happened. I paid attention to the levels 0.9813 and 0.9861 in my morning forecast and advised making decisions on entering the market there. The bears attempt to continue the euro's decline in the morning had failed. The test and forming a false breakout in the area of 0.9813 led to a signal for long positions on the euro, which resulted in growth by more than 40 points in the 0.9861 area. A breakthrough and reverse test of this range from top to bottom resulted in creating another signal for entering long positions, which allowed us to pick up about 20 more points. The euro was under pressure in the afternoon after we received good statistics on the US labor market, and a breakthrough and a reverse test from the bottom up of 0.9847 gave a sell signal. As a result, the pair collapsed into the 0.9813 area. As in the morning, the bulls were more active there, which led to a false breakout, a buy signal and growth back to 0.9847. 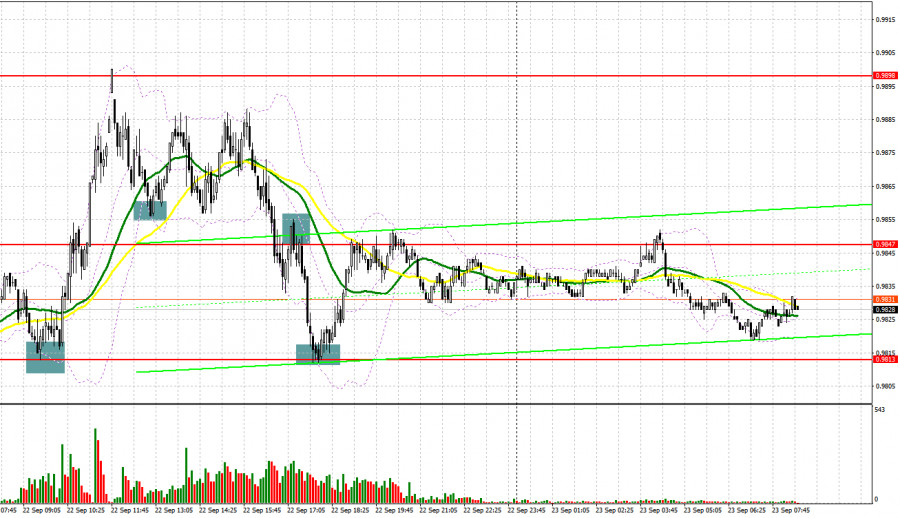 The pressure on the euro has clearly persisted after recent statements by Federal Reserve Chairman Jerome Powell, who promised that he would crush inflation by any means after the Open Market Committee raised interest rates by another 75 basis points. Yesterday's labor market data only reinforced the descriptions that the Fed will continue to act quite aggressively. As for statistics, today there are quite a large number of economic indicators on activity in the eurozone, which is expected to fuel the decline, which is a consequence of the European Central Bank's policy, following on the heels of the US central bank. If the data on the index of business activity in the manufacturing sector of the eurozone, the index of business activity in the services sector and the composite index of business activity disappoint, do not be surprised if the euro goes to update annual lows. In such conditions, it is not necessary to count on the level of 0.9813. This area has already been tested twice and only another false breakout in the area of 0.9813 creates a new buy signal. The target of the upward correction in this case will be the level of 0.9853, formed by yesterday's results. Only a breakthrough and a top-down test of this range, together with strong statistics on the eurozone, will hit the bears' stop orders, creating another signal to open long positions with the possibility of a dash up to the 0.9898 area. A more distant target will be the resistance of 0.9952, where I recommend taking profits.

In case EUR/USD falls further, which is more likely, and the bulls are not active at 0.9813, the pressure on the pair will increase, which will lead to the continuation of the bearish trend. The optimal solution for opening long positions in such conditions would be a false breakout near the 0.9770 low. I advise buying EUR/USD immediately for a rebound only from 0.9723, or even lower – around 0.9684, counting on an upward correction of 30-35 points within the day.

Bears control the market after yesterday's major sell-off from the 0.9900 level. Given that there are no special reasons to buy risky assets yet, I expect a further decline in the pair. The most optimal option for short positions in the current conditions will be after the pair grows in the first half of the day to the area of 0.9853 and a false breakout forming there. This will lead the euro to a repeated update of the annual low of 0.9813, the breakdown and consolidation below which, with a reverse test from the bottom up, will create another sell signal with the removal of bulls' stop orders and a larger fall of the pair to the area of 0.9770. A more distant target will be the 0.9723 area, where I recommend taking profits.

In case EUR/USD jumps during the European session, as well as the absence of the bears at 0.9853, and there are moving averages playing on the bears' side, demand for the euro will return by analogy with yesterday, which will move the pair to the horizontal channel. However, nothing terrible will happen for them. An upward correction will lead to the next resistance of 0.9898. In this scenario, I recommend opening short positions only if a false breakout is formed. You can sell EUR/USD immediately on a rebound from the high of 0.9952, or even higher – from 0.9996, counting on a downward correction of 30-35 points. 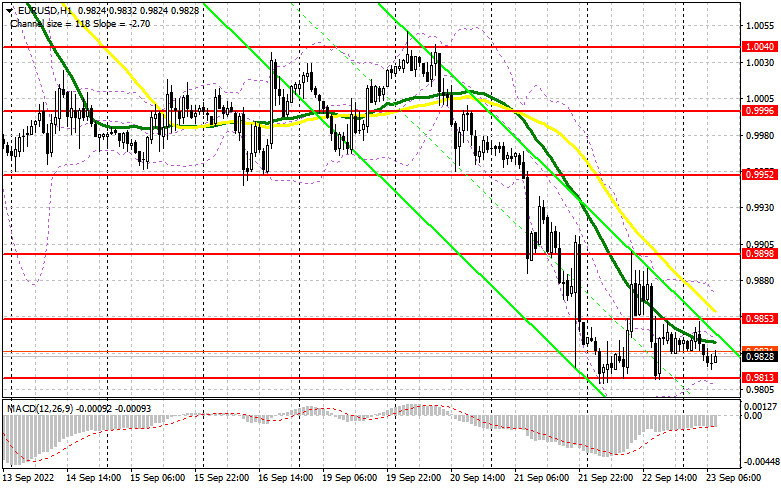 The Commitment of Traders (COT report) for September 13 logged a decline in short positions and a slight increase in long positions. This suggests that the European Central Bank meeting and a sharp increase in interest rates immediately by 0.75% influenced traders who preferred to take profits at current levels even despite the approaching Federal Reserve meeting. This week, the Open Market Committee is likely to raise rates by at least 0.75%, but there are rumors in the market that some politicians are in favor of raising the rate by 100 basis points, or 1.0%. This will lead to increased bearish momentum and the euro's new collapse against the US dollar. Considering the US inflation data for August of this year, the development of such a scenario cannot be ruled out. However, it should be understood that the European Central Bank is also no longer "sitting on the sidelines" and is starting to catch up with the Federal Reserve, reducing the gap between returns. This plays on the side of long-term bulls of the euro, who are counting on a recovery in demand for risky assets. The COT report indicated that long non-commercial positions rose by 2,501 to 207,778, while short non-commercial positions decreased by 22,011 to 219,615. At the end of the week, the overall non-commercial net position remained negative, but rose slightly to -11,832 from -36,349, which indicates the continuation of the alignment of the upward correction for the pair and groping the bottom. The weekly closing price increased and amounted to 0.9980 against 0.9917.

Trading is below the 30 and 50-day moving averages, indicating an attempt by the bears to regain control of the market.

In case of growth, the upper border of the indicator in the area of 0.9875 will act as resistance.