Euro was unable to cling around 0.9900 so it quickly returned to yearly lows. The reason was the US jobless claims report yesterday, which reminded traders of why they bet on dollar in the current environment. For this, too high inflation is to blame as it forces the Federal Reserve to act more aggressively.

A number of reports are due out today, such as the index of business activity in the manufacturing sector, the service sector and composite index of Eurozone countries. All of them do not carry anything good, so it is likely that a new wave of sell-offs will be seen in euro, which will push it beyond yearly lows. Similar data from the US will be released in the afternoon, but there the indices may surprise traders. This could lead to another rise in dollar, especially if Fed Chairman Jerome Powell talks about further rate hikes in his speech. 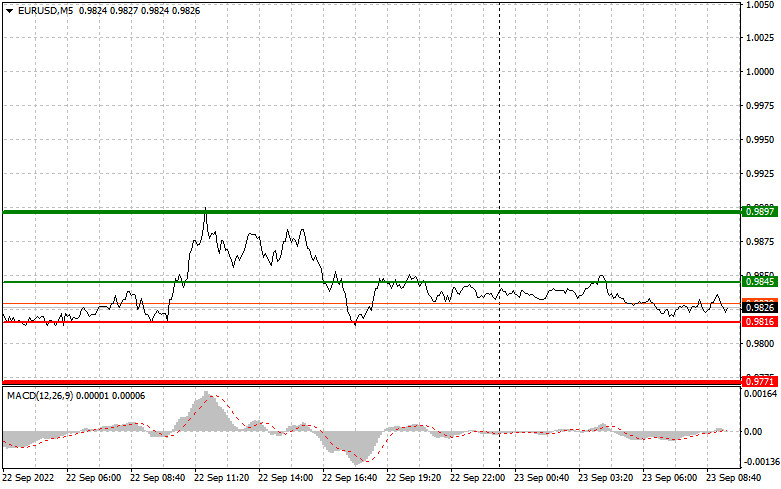 Buy euro when the quote reaches 0.9845 (green line on the chart) and take profit at the price of 0.9897. However, growth is unlikely especially if the Euro area reports weak economic statistics.

Sell euro when the quote reaches 0.9816 (red line on the chart) and take profit at the price of 0.9771. Pressure will return amid a bad data in the US and continued hawkish policy by the Fed.