16.05.202205:04 ফরেক্স বিশ্লেষণ এবং পর্যালোচনা: Overview of the GBP/USD pair. May 16. The pound is trying to rise from the ashes and is waiting with horror for the inflation report. 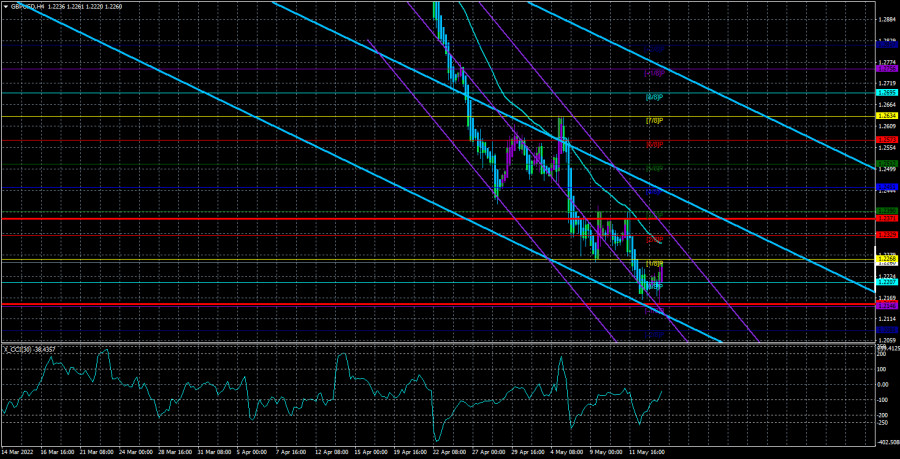 The GBP/USD currency pair started a microscopic correction on Friday. "Microscopic", because it is poorly visible even on a 4-hour TF, and there is not even an upward pullback on a 24-hour TF. At the moment, the price has not been able to grow even to the moving average line. Therefore, it is still impossible to talk about the end of the downward trend now. The situation with the pound is now almost the same as for the euro. Most of the factors remain in favor of the US dollar, but at the same time, it should have been won back by the market for a long time. In addition, the pound has a serious support factor: the Bank of England, which has already raised the rate four times and is keeping pace with the Fed on this issue. Nevertheless, the pound still falls like a stone thrown into the abyss. Thus, we believe that the pound is now just as much oversold as the euro currency. In principle, this is also indicated by the CCI indicator, which has already entered the oversold area three times in recent weeks. Each such entry is a strong buy signal. As you can see, if the first time the pair at least pretended that it was corrected, then the second and third time there was not even such a correction. Thus, the end of the downward trend is already frankly brewing, and the growth factors of the dollar cannot forever provoke its strengthening. The COT report fully supports the fall of the British currency, but the fact that the number of buy positions from professional traders exceeds the number of sell positions by four times also indirectly indicates that the situation may soon begin to change in the opposite direction.

Inflation in the UK continues to break records.

Macroeconomics is now as important for the pound as for the euro. That is, practically none. The market reacts to reports from time to time, but it does it very one-sidedly. In other words, some reports are processed, some are not, and the trend remains downward. Already a classic example of GDP: the US economy in the 1st quarter fell by 1.4%, the UK GDP grew by 0.8%, but the dollar is still growing. Thus, all the reports of this week have the opportunity only to locally affect the exchange rate of the pound/dollar pair. In the UK, reports on unemployment, average wages, and applications for unemployment benefits will be published on Tuesday. Although this is quite important data, we believe that there will be no reaction to them. On Wednesday, the inflation report for April will be released and this report is the most important. The consumer price index is expected to be 8.9-9.1%, which means an acceleration of 2% compared to the March value. This report can be worked out by the market. How exactly - it makes no sense to guess, the market can both sell the pound and buy it. Now the general mood of the market is important, but it remains "bearish". But a spike in volatility is guaranteed. Also note that even a strong acceleration of inflation will not guarantee new rate hikes by the Bank of England, as it has already raised it four times in the last four meetings. Friday in Britain is not the most important report on retail sales.

In the States on Tuesday - retail sales for April, industrial production, and Jerome Powell's speech. No one is waiting for new information from Powell right now, because a 1% increase in the key rate in June and July is almost guaranteed in total. The Fed has clearly outlined a monetary policy plan for the coming months and even several years, so there are no questions for Powell right now. Of course, one should always expect that the head of the Fed will present a "surprise", then we believe that now the probability of this is low. There are no more interesting events planned for this week in the States. 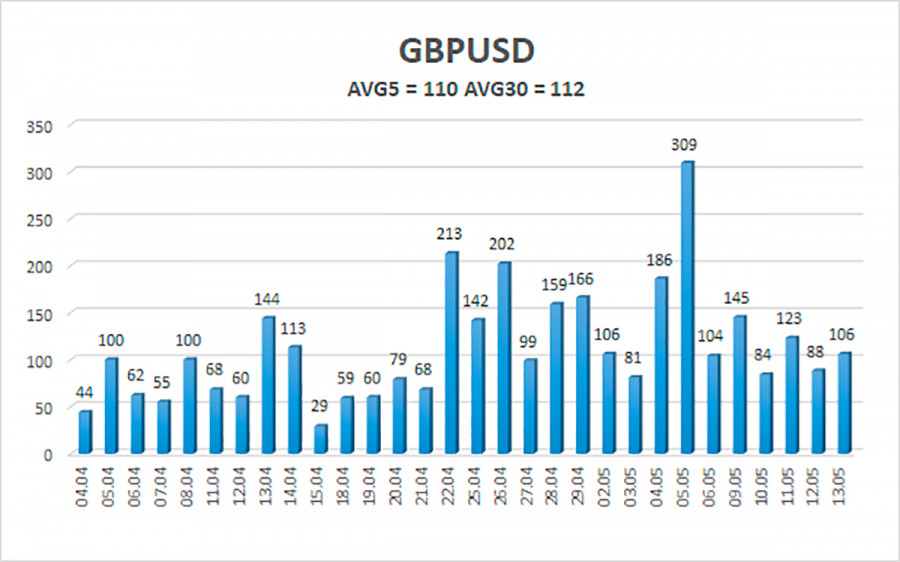 The average volatility of the GBP/USD pair over the last 5 trading days is 110 points. For the pound/dollar pair, this value is "high". On Monday, May 16, thus, we expect movement inside the channel, limited by the levels of 1.2152 and 1.2371. A reversal of the Heiken Ashi indicator back down will signal a possible resumption of the downward movement.

The GBP/USD pair maintains a downward trend in the 4-hour timeframe. Thus, at this time, it is necessary to consider new sell orders with targets of 1,2207 and 1,2146 after the reversal of the Heiken Ashi indicator down. It will be possible to consider long positions if the price is fixed above the moving average line with a target of 1.2371.

Linear regression channels - help to determine the current trend. If both are directed in the same direction, then the trend is strong now.