Bitcoin and the cryptocurrency market continue the recovery movement that originated in the current trading week. The main digital asset managed to make a bullish breakout of the $17k level, and the capitalization of all cryptocurrencies reached $858 billion.

The main catalyst for bullish sentiment in the market was macroeconomic factors, as well as the gradual approach of the Christmas holidays. Against this background, Bitcoin resumed its correlation with stock indices.

Fed Chairman Jerome Powell's speech was the main catalyst for bullish movements in most markets. The head of the regulator said that a pleasant surprise on the decline in CPI in October gives reason to reduce the pace of rate hikes to moderate. 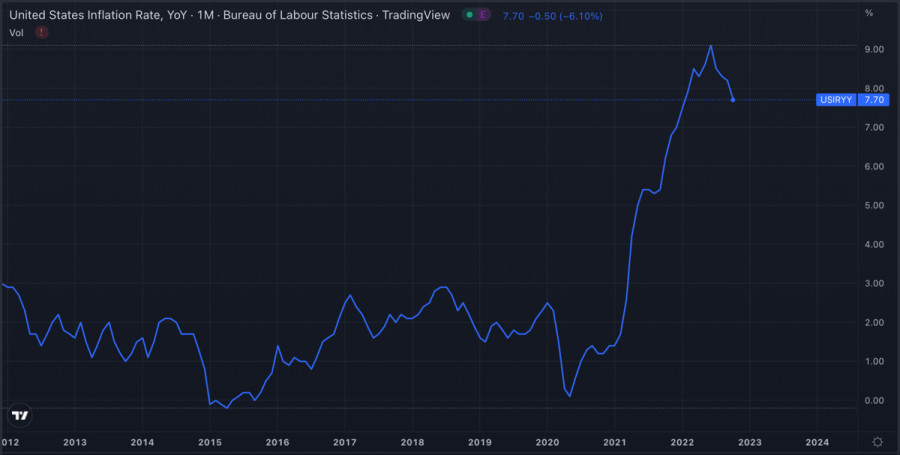 Powell noted that the first stage of slowing down the rate hike could happen as early as the December meeting. Interest rate futures immediately reacted, and the probability of a 50 bps rate hike in December is 75%.

However, Powell stressed that inflation is still too high, and therefore it is likely that the final rate hike will be higher than the Fed planned in September. He also noted the need for more evidence of lower inflation.

Despite the fly in the ointment, Powell's speech generally confirms the course of the US monetary policy easing. Considering the record rate of monetary easing in history, the markets see the slowdown as positive news. 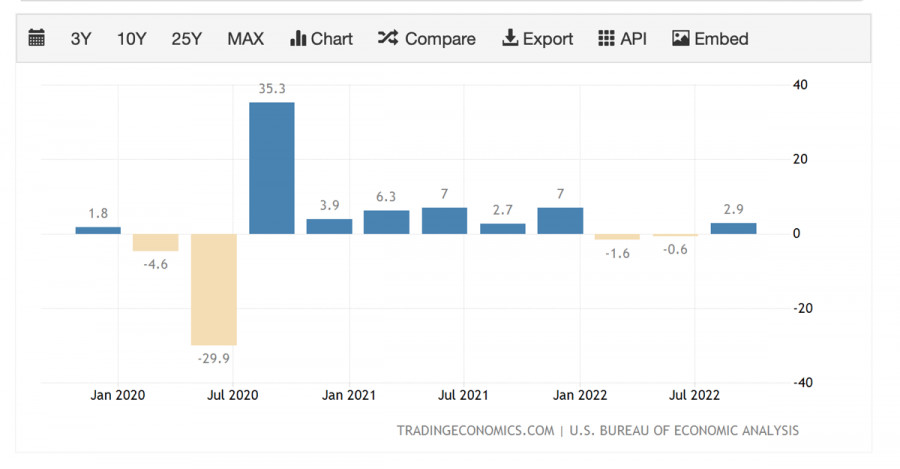 The statistics on the US GDP growth in the third quarter also added to the positivity. The indicator was 2.9% against the forecast of 2.7% , which indicates the relative stability of the world's largest economy.

Financial Times experts decided to finish off the markets with a statement that most of the key indicators point to the achievement of the peak point of global inflation. In the coming months, we should expect a fall in inflation worldwide.

Today's analysis of the state of Bitcoin should start with the US dollar index. The indicator is in a corrective movement and, as of December 1, is trading near 105.7.

That said, USD showed the largest monthly rate in November since 2009. This is positive news for high-risk assets, including cryptocurrencies and the stock market. As we remember, Bitcoin has an inverse correlation with DXY, and given the correction of the index, we should expect more bullish momentum on the cryptocurrency. 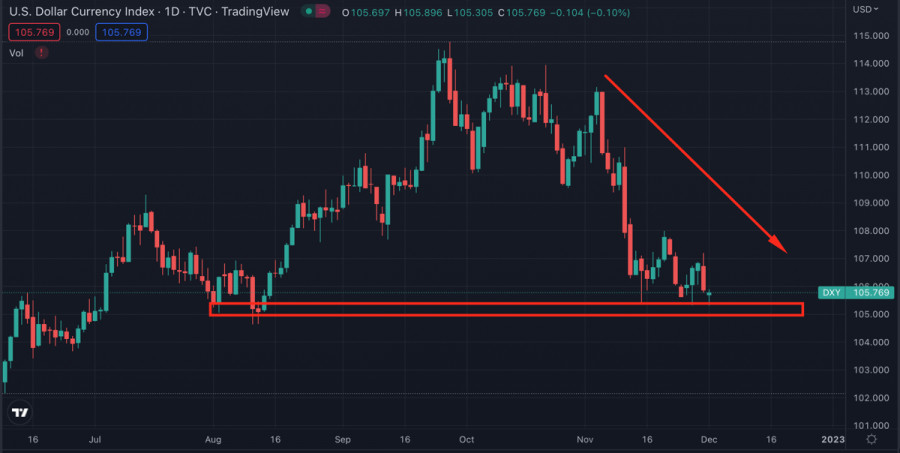 It is also important to note BTC's growing correlation with stock indices. The collapse of FTX broke the co-dependence of financial instruments, but it has subsequently recovered and strengthened.

Given the rising holiday mood in the stock market, which is always accompanied by a New Year's rally, we can expect a similar movement in the price of Bitcoin. However, provided that the conditional Genesis or Gemini will not become another black swan. 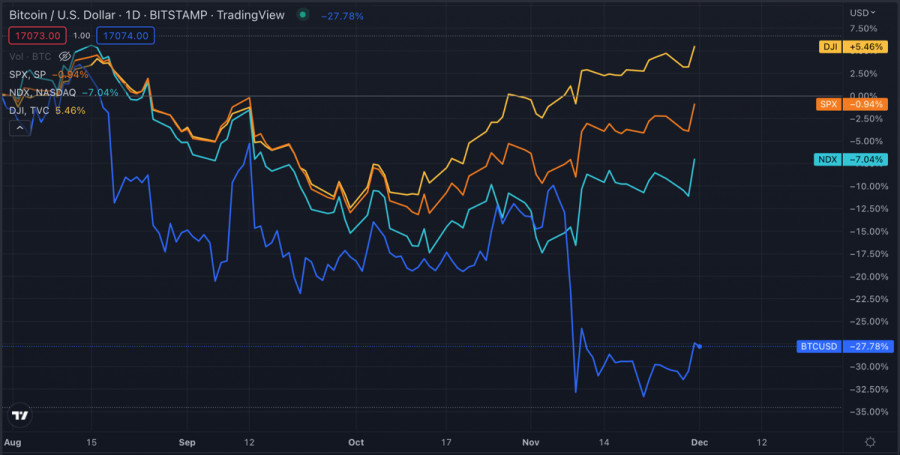 The combination of movements in macroeconomics and related markets allowed Bitcoin to form a bullish engulfing pattern and gain a foothold above $17k. Glassnode experts note that after a successful bullish momentum, the number of addresses in profit reached the level of 50%. This indicates a substantial accumulation of BTC below $20k.

Having reached the $17k round level, the price of Bitcoin faced strong resistance from the bears. The cryptocurrency is on the verge of a bullish breakout of the $15.5k–$17.1k range, but technical metrics point to weakening buying positions. 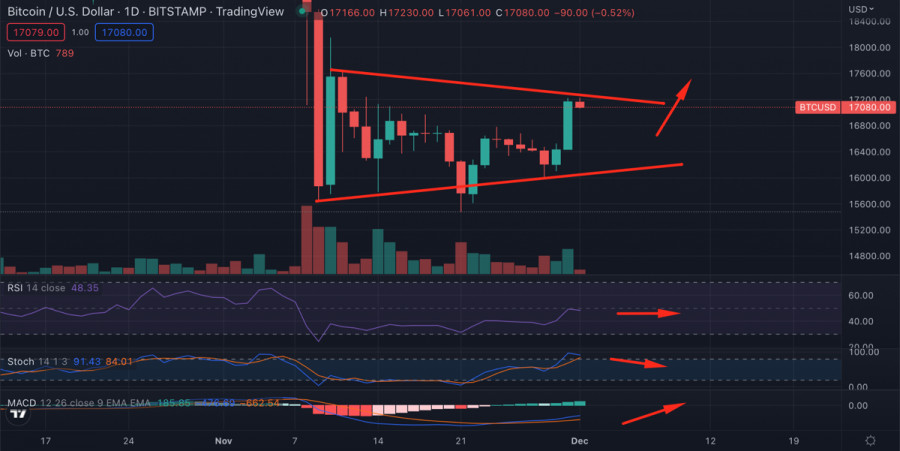 Stochastic is gradually forming a "bearish crossover" pattern, and RSI indicates a decrease in buying activity or a significant increase in bearish pressure. At the same time, MACD continues to move upward, suggesting the strength of the medium-term upward trend.

The macroeconomic background and improving investor sentiment contribute to the upward movement of most markets, including cryptocurrency. In the near future, a pause and retest of the $16.7k level is possible, where a local support area has formed. 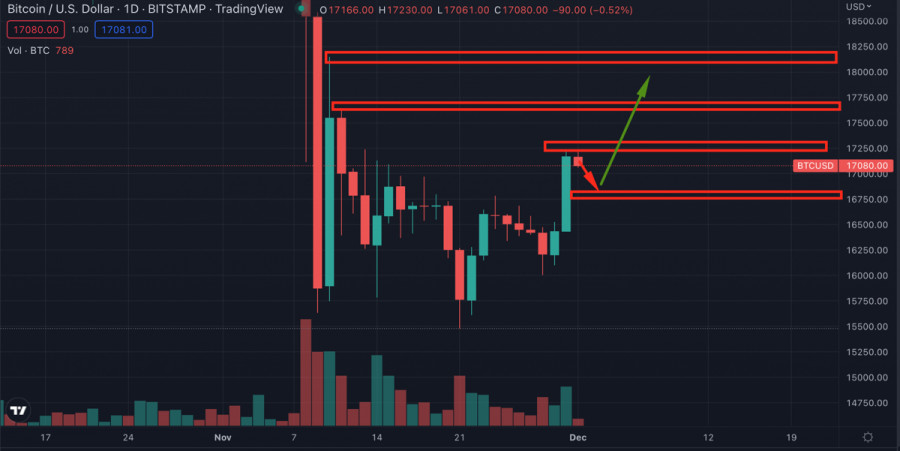 To maintain the bullish potential, Bitcoin needs to hold the $16.7k level and gain a foothold above $17k again. Under such conditions, the cryptocurrency will continue to move towards the next targets at $17.6k and $18.2k. The further movement of BTC will depend on the overall situation, since all the positive does not negate a large number of negative factors.