Forex Analysis & Reviews: GBP/USD. Analysis for the trading week of November 28–December 2. COT report. The US dollar was weakened by nonfarm and Powell. 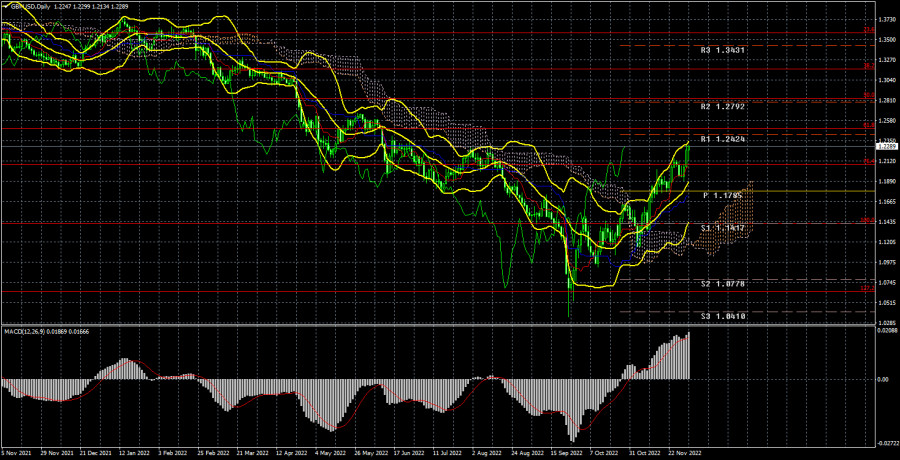 The GBP/USD currency pair has gained another 220 points during the current week. Powell's words could be interpreted in any way, and traders concluded that they were again not in favor of the dollar, although Powell mentioned a longer rate hike and a longer period of high rates. But why did traders wait for the Fed chairman's speech if they could keep selling US dollars? This week's movements of the pair were devoid of logic. Friday's nonfarm payrolls came in above expectations, last month's value was revised upward, and the dollar continued to fall in price at the end of the day.

As a result, it makes no sense to analyze any Nonfarms or Powell speeches at this time. What difference does it make what the monetary committee members say just two weeks before the last meeting or what reports are released if the market is still selling the dollar? This week, nothing was interesting in the UK because it is difficult to consider the index of manufacturing business activity, which was below the "waterline" and remained below it, as an important event.

It is only necessary to examine the technique. Nothing has changed in the past week because the pair has only moved in one direction. Essentially, we have been waiting a long time for the global downward trend to end, and we are now waiting for the downward correction to begin. And it could happen at any time because the market is unresponsive to events that should support the dollar. So, once it has had enough of the pair's purchases, it will start selling them, which will also be illogical.

For the second week in a row, the latest COT report on the British pound showed an increase in "bearish" sentiment. The non-commercial group closed 5,000 buy contracts and 4,000 sell contracts last week. As a result, the net position of non-commercial traders fell by 1,000. The net position indicator has gradually increased in recent months. Still, the mood of major players remains "bearish," and while the pound sterling is rising against the dollar, it is difficult to explain why. We do not rule out the possibility of a sharp decline in the pound in the near future. Also, both major pairs are moving almost identically right now. Still, the net position for the euro is positive and even suggests that the upward momentum is about to be completed, whereas the net position for the pound is negative. The "non-commercial" group now has 62 thousand contracts for sale and 28.5 thousand for purchase. As we can see, the difference is significant. The bulls have a 13 thousand advantage in open buy and sell positions. Although there are technical reasons to be skeptical about the long-term growth of the British currency, the foundation or geopolitics do not imply such a strong strengthening of the pound sterling.

Because nothing was interesting in the UK this week, we can only consider American news and events, as we did in the first part of the article. Even so, they could not be considered because the market reacted to them as it saw fit. As a result, there was a reaction, but it provided no benefit. Aside from trading actively and volatilely this week, both pairs showed good intraday trends. As a result of our recommendations, it was possible to make good money on shorter timeframes. Nothing interesting is happening in Britain right now, either globally or locally. We previously stated that the Supreme Court's decision on the inadmissibility of Scotland to hold an independence referendum could support the pound. However, this occurred more than a week ago and has nothing to do with the euro or the European Union. Jeremy Hunt's financial plan has also been available for some time, so he is unlikely to support the British pound.

Trading strategy for the week of December 5-9:

1) Because the pound/dollar pair is above all of the Ichimoku indicator's key lines, it has the technical grounds to form a new long-term upward trend. The nearest targets are 1.2307 and 1.2759, with the first already calculated. A downward correction is required, as indicated by the 4-hour TF. However, the pair must fall below the 4-hour moving average for this to happen.

2) The pound sterling appears to be forming a new upward trend. It now has legitimate reasons to grow, but it has gained nearly 2,000 points in two months. How much longer will traders be willing to keep buying? Sales are no longer relevant, but we are still looking for a significant correction in the vicinity of the Senkou Span B line.

Price levels of support and resistance (resistance and support), Fibonacci levels – targets when opening purchases or sales. Take Profit levels can be placed near them.