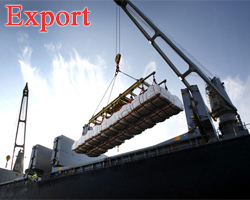 Switzerland's exports declined for the third straight month and at a faster pace in April, data from the Federal Customs Administration showed on Tuesday.

Exports decreased by a real 10.0 percent month-on-month in April, following a 3.1 percent fall in March.

The biggest decline was seen in the exports of jewelry and jewelry divisions by 77.0 percent. Imports of chemical-pharmaceutical products decreased 4.8 percent.

The trade surplus increased to CHF 4.3 billion in April from CHF 3.07 billion in the previous month.

According to the Federation of the Swiss Watch Industry, watch exports dropped 81.3 percent year-on-year in April.