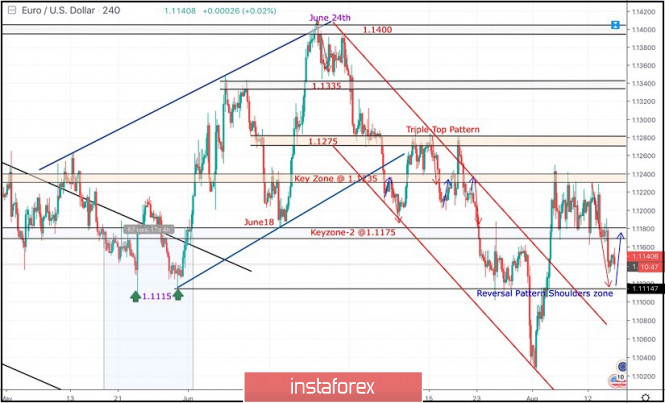 Back in June 24, the EURUSD looked overbought around 1.1400 facing a confluence of supply levels.

Thus, a bearish movement was initiated towards 1.1275 followed by a deeper bearish decline towards 1.1235 (the lower limit of the previous bullish channel) which failed to provide enough bullish support for the EUR/USD pair.

In the period between 8 - 22 July, sideway consolidation-range was established between 1.1200 - 1.1275 until a triple-top reversal pattern was demonstrated around the upper limit.

Shortly after, evident bearish momentum (bearish engulfing H4 candlestick) could bring the EURUSD back below 1.1235.

Risky traders were advised to look for bullish persistence above 1.1050 as a bullish signal for Intraday BUY entry with bullish target projected towards 1.1115, 1.1175 and 1.1235.

During the past week, the depicted Key-Zone around 1.1235 has been standing as a prominent Supply Area where TWO Bearish Engulfing H4 candlesticks were demonstrated.

Earlier this week, another bullish visit was demonstrated towards 1.1235 where another episode of bearish rejection was anticipated.

Thus, the EUR/USD was trapped between 1.1235-1.1175 for a few trading sessions until bearish breakout below 1.1175 occurred Yesterday.

Bearish persistence below 1.1175 is promoting further bearish decline towards 1.1125-1.1115 where another intermediate-term bullish position can be offered (The right shoulder of the expected reversal pattern).

Conservative traders should wait for a deeper bearish pullback towards 1.1125-1.1115 for a valid BUY entry (where the right shoulder of the reversal pattern is expected to be located).