EUR / USD. 6th of August. Results of the day. Blank news calendar, no reason to rest 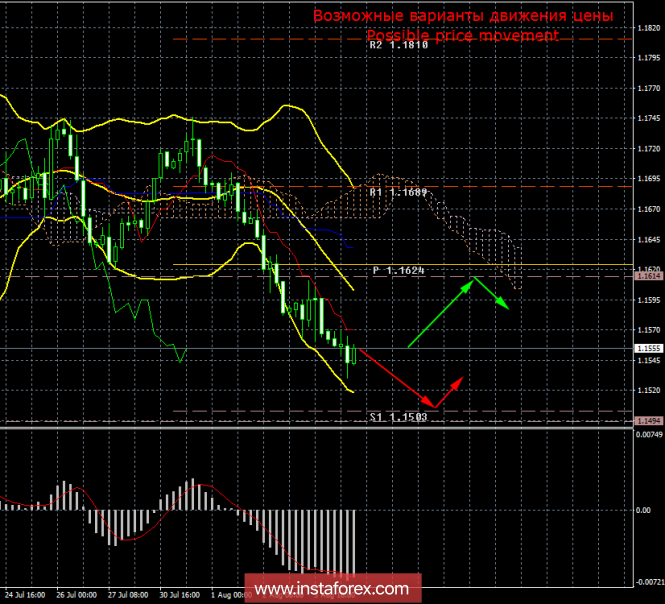 On Monday, August 6, the EUR / USD currency pair continues not too strong, but a confident downward movement. An absolutely empty calendar of macroeconomic news did not become an obstacle for traders to conduct active trade. As well as on Friday, traders did not begin to reduce dollar positions, wishing to fix profit. And this means only one thing, the market is confident in further strengthening of the US currency. Why is that? On the one hand, everything is clear. The Fed continues to tighten monetary policy. The introduction of trade duties against China and other partners is regarded by traders as a positive moment for America. Thus, while Trump continues to escalate the situation and threaten China with the imposition of duties on almost all exports to America, it will be in the hands of the US dollar. The situation may change when it becomes clear which common response China will take. Recall that the loss of such a market as America, for China will be extremely disadvantageous. At the same time, his economy is strong enough to withstand such a blow. Thus, most likely, Beijing will respond to Washington with comparable countermeasures. And when markets see the negative effects of these measures on the US economy, their optimism may diminish. So far, this has not happened, the US dollar may go up for several months in a row, if not more. Especially, considering the fact that the European Union has nothing to cover in this confrontation. Through the efforts of Jean Claude Juncker, it was possible at least to begin negotiations with America on the abolition of all duties between the countries, but so far these are only oral agreements. About the monetary policy, the ECB says nothing, it is at times "softer" the policy of the Fed, and a rate hike in Europe in the coming months is not planned. Thus, the growth of the US dollar is fully justified and does not cause any criticism.

The currency pair EUR / USD continues to move down without signs of a correction beginning. The target for short positions is 1.1503. Turning the MACD indicator up (with a parallel increase in price) will signal a manual shortening of the shorts.

Orders for the purchase can be considered small lots if the MACD indicator signals the beginning of the correction. The Tenkan-sen and Kijun-sen lines have moved away from each other, and the downward movement has been going on for several days, so the correction is still brewing.

In addition to the technical picture, one should also take into account the fundamental data and the time of their release.

Explanations to the illustration:

Tenkan-sen is a red line.

Kijun-sen is a blue line.

Senkou Span A is a light brown dotted line.

Chinkou Span is a green line.