Pound: we only dream of peace

Political risks throw the British pound into the heat, then in the cold. The statement of the chief negotiator from the EU Michel Barnier that Brussels is ready to offer London an unprecedented deal, allowed quotes of the GBP/USD to soar above the psychologically important mark of 1.3. Alas, a few hours later Barnier declared a categorical disagreement with Theresa May's plan. At the same time, former Brexit Secretary David Davis said that he would vote against the Prime Minister's program, which involves significantly worse conditions than there were.

Theresa May will have a daunting task - first to find a compromise within the country, and then to reach an agreement with the EU. The situation is aggravated by the Congress of the Conservative party in September. And if in June the prime minister managed to maintain her leadership, now she will have to undergo a new test. As a result of the aggravation of political risks, the volatility of the sterling may come out of the trading range and go up, which will negatively affect the positions of the bulls on the GBP/USD. Britain has the highest ratio of the negative current account to GDP in the G20 countries, its financing requires an inflow of investments, and it is difficult to lure non-residents to the local market in conditions of increased volatility of the pound.

The dynamics of the volatility of the pound 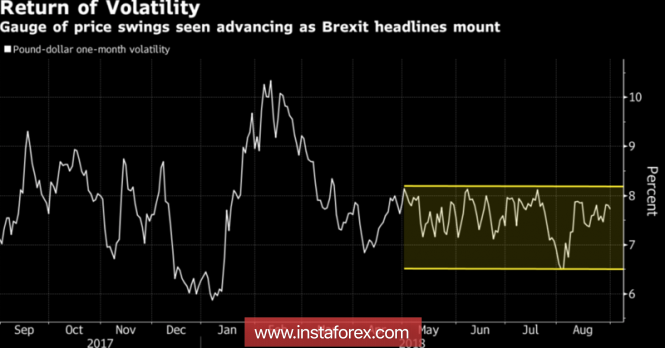 The pressure on sterling is exerted by disappointing macroeconomic statistics. The index of purchasing managers in the manufacturing sector in August was marked by the worst dynamics in the last two years. Export orders fell below the critical level of 50 for the first time since April 2016. As Bloomberg research shows, British companies preferred to save money instead of taking advantage of the devaluation and increase investment. Now, in the face of fears about the slowdown of the world economy, the decline in external demand creates serious problems for them.

It should be recognized that the fall of the GBP/USD contributed to the gradual recovery of the US dollar. Difficulties in negotiations between the United States and Canada lead investors to the idea that the settlement of the dispute between Washington and Beijing may take even longer, and the truce between the US and the EU will end very soon. As a result, the risks of escalation of trade conflicts have increased, which provides support to the US dollar.

The pound will have a rather difficult week, because after the release of data on business activity in the manufacturing sector, the indices of purchasing managers in the construction sector and in the service sector will be published. The last indicator is very important, as the non-production sector accounts for around 80% of British GDP. Add to this the continuing political risks, and it will become clear that the purchase of sterling should be treated very carefully. The aggravation of tensions between the EU and the UK and Theresa May's problems with retaining leadership in the Conservative party and with the vote in Parliament will become a catalyst for GBP/USD sales. 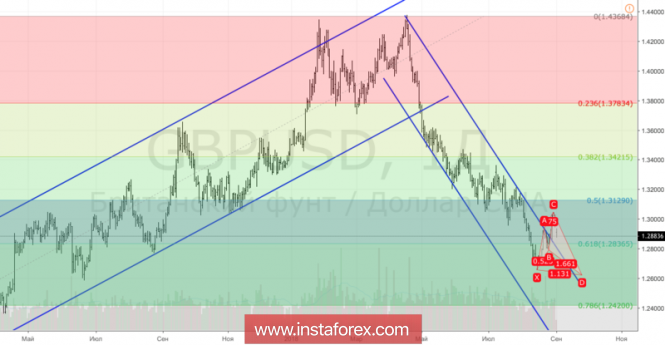