The pound sterling fell by 110 points yesterday due to the tightening of the rhetoric of both candidates for the post of British prime minister, Boris Johnson and Jeremy Hunt, regarding the conditions of Brexit, namely along the rigid border with Ireland, which could later lead to Brexit without a transitional deal. Also elected to the post of head of the European Commission, Ursula der Layen mentioned the harsh conditions for the UK, although she allowed the possibility of another postponement of it's date.

Inflation figures for June will be released today in the UK. Forecasts for them are more negative than positive. The base CPI could increase from 1.8% y/y to 1.7% y/y, but the overall CPI is projected to remain unchanged at 2.0% y/y and the producer price index significantly pulls down the overall situation - the forecast is -1.0 % y/y versus 0.0% y/y in May. The price index for residential real estate could drop from 1.4% y/y to 1.2% y/y. 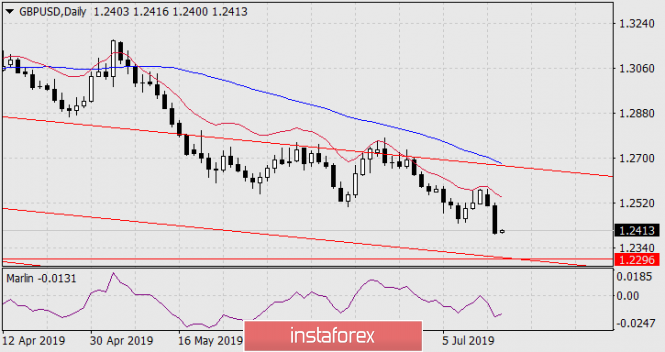 The price is in a downward trend on the daily chart and there are no obstacles to reaching the target level of 1.2296, which is the support for the embedded line of the price channel. 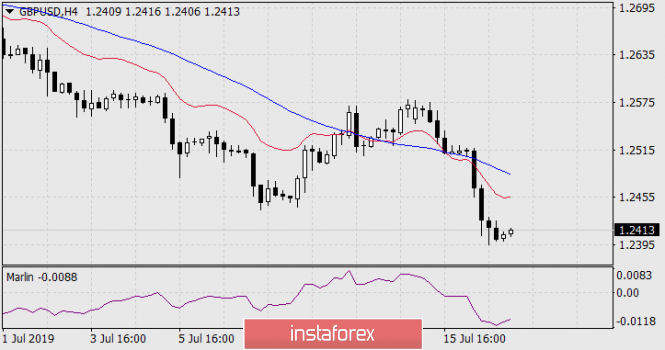 On the four-hour chart, the price is securely consolidated below the balance line and the MACD line. The Marlin oscillator is slightly bent up, but this is a sign of a small discharge of the indicator before it decreases further.