EUR/USD. Preview of the week. Lagarde in the European Parliament, the "vendetta" of China and Nonfarm

Bears of the euro-dollar pair again tested the ninth figure on Friday in spite of fairly strong data on the growth of European inflation. The last trading day of the week and month was indicated by abnormal price movements: the strong downward impulse faded before it started. In the last hours of the trading week, many market participants took profits without risking leaving open positions for the weekend. Therefore, EUR/USD traders closed November within the 10th figure. The pair began trading on the first day of December at the same positions. The fundamental background for the dollar is still controversial - the dollar is keenly reacting to news from the front of US-Chinese negotiations, and the euro is torn between good macroeconomic reports and the dovish intentions of ECB members.

Not many important macroeconomic statistics are expected for the EUR/USD pair during this trading week (with the exception of the ISM and Nonfarm manufacturing index). The main focus of the market will be focused on the dynamics of the development of US-Chinese trade relations and on the comments of Federal Reserve and ECB officials. Geopolitics will also play a role in determining the growth or decline of anti-risk sentiment in the foreign exchange market. 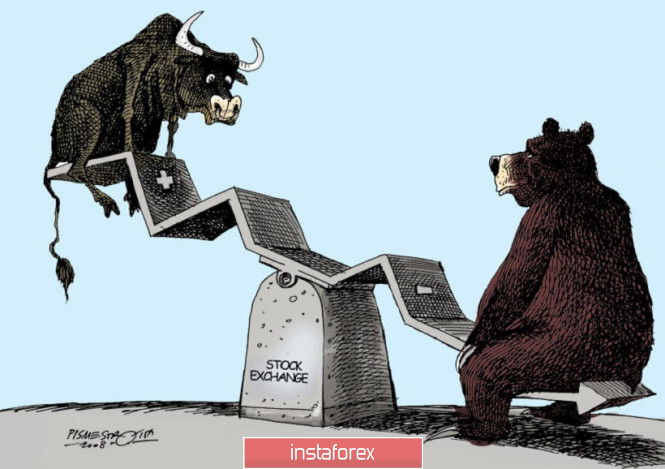 First of all, we are talking about the situation in Hong Kong, where the confrontation between anti-Chinese protesters and the city administration continues. Yesterday, police dispersed several thousand anti-government protesters, ending a brief lull after local elections. Last week, Trump signed bills in support of protesters, and this fact provoked a negative reaction from Beijing. Chinese officials promised Washington to retaliate, but so far these threats have not been translated into reality. Traders had the hope that the political conflict would not affect the negotiation process between the United States and China - all the same, the effects of the trade war are felt both by the United States and China. This intrigue may be resolved this week, especially in light of the approaching December 15, when next duties should come into force over Chinese imports.

If we talk about the planned speeches of the "top officials" of the central bank, which are important for EUR/USD traders, then we should highlight today's speech by the head of the European Central Bank Christine Lagarde. At 12:00 (London time), she will announce a report to members of the Committee of the European Parliament on economic and monetary issues. Since the topic of the report is directly related to monetary policy, the market will show particular interest in it. Let me remind you that in her recent speeches, she called on EU countries to bet on investments, thereby stimulating economic growth in the eurozone. Given the existing split in the ECB camp (in September, some regulator members opposed the resumption of QE), this Lagarde rhetoric was indicative: judging by everything, it will continue to exert verbal pressure on the EU countries - primarily Germany and the Netherlands - urging them to use surplus of their budgets.

She can also comment on data published on Friday on the growth of European inflation. Contrary to negative forecasts, the consumer price index rose in November, reaching 1.0% from the previous value of 0.8% (growth forecast was at 0.7%). Core inflation also showed a positive trend, rising from 1.1% to 1.3%. This is the best result in the last six months. In this context, Lagarde's personal position regarding this inflationary dynamics, as well as her comments on the moods among the members of the European Central Bank, are also of interest. The euro will receive some support if the essence of the rhetoric is reduced to a wait-and-see attitude.

ECB board member Benoit Coeure is set to speak (December 3) this week, who unexpectedly joined the dissidents at the September meeting, speaking out against the resumption of the stimulus program. Fed official Randall Quarles, who takes the post of vice chairman of oversight in the Federal Reserve, will speak on December 4.

As for macroeconomic reports, it is worth noting the ISM manufacturing index will also be published today during the US session. Previous releases of this indicator put pressure on the dollar: the index has been below the 50th mark since August, marking the worsening situation in this area. According to preliminary forecasts, a slight recovery of the indicator is expected today (from 48.3 to 49.2 points). This will put quite strong pressure on the US currency if the index declines, especially in light of the uncertain prospects for the US-Chinese dialogue.

Over the course of two days (December 2 and 4), we will also find out the importance of European PMI indices in the manufacturing and services sectors. But we are talking about final estimates, which, as a rule, coincide with the initial data. Therefore, these releases are unlikely to affect the dynamics of the EUR/USD pair.

The most important day of this week is Friday, when Nonfarm will be published. The greenback will receive significant support if the real data corresponds to preliminary forecasts. Thus, the unemployment rate should remain at the previous level - 3.6% - against the background of a fairly strong increase in the number of employees (+190 thousand). But a separate line is worth noting here, the growth rate of the average hourly wage. Analysts expect the indicator to recover - in annual terms, it should grow to a three percent mark, and in monthly terms - to 0.3% (after falling to zero). If salary data is in the green zone, it will be difficult for the EUR/USD bulls to keep their positions occupied by that moment.

In general, the euro-dollar pair continues to trade within the range of 1.0970-1.1090: last week the bears could not push the lower boundary of this band, while the bulls could not even squeeze to the middle of the 10th figure. This week, the struggle between sellers and buyers will erupt with renewed vigor, even despite the relatively empty economic calendar.