U.S. government bond yields fell on Wednesday. The 2-year rate shed about 10 points (4.23-4.36%) as it fell from the lower limit of the weekly range that formed since investors started to have expectations on the Federal Reserve meeting. The euro rose 40 pips on this.

The price tried to reach the important test level of 1.0433. But this level was not tested (and, as a consequence, a reversal from the support), which provides a chance for the price to go down again. 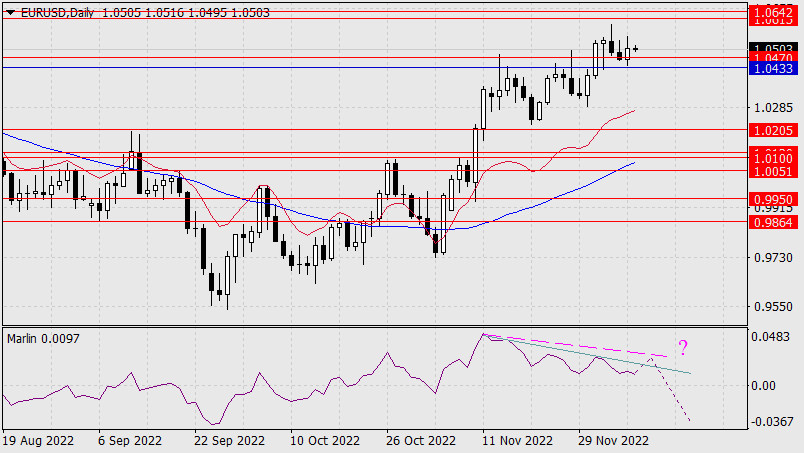 But the attempt at growth looks stronger, so the price's probability of reaching the target range of 1.0615/42 has slightly increased.

The signal line of the Marlin oscillator is directed downward, while this weighs on the price, there is a 60% probability that the support at 1.0433 will be tested from the current levels.

It is unlikely that the euro will decide to make sharp movements before the Fed meeting, which is due on the 14th, so in case it breaks through 1.0433, EUR might rise again. 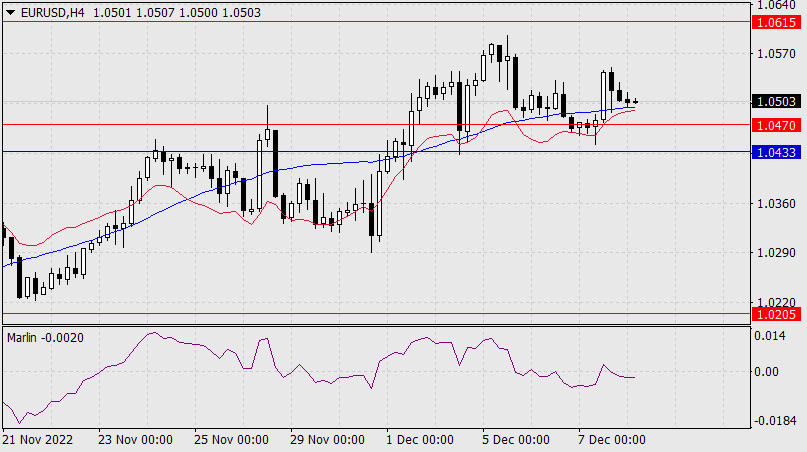 On the four-hour chart, the Marlin oscillator returned to the negative territory, making yesterday's way to a positive a false move. Therefore, at least the price will try to break the support of the MACD line and try to overcome the support at 1.0470 to reach 1.0433. There are no bright trading signals for today. Growth in the range of 1.0615/42 is possible only if the price crosses yesterday's high at 1.0550.

Yesterday, the euro failed to move towards the 1.0990 target and rolled back to Wednesday's initial positions. If today's U.S. consumer income/expenditure data is close to the forecast, the 1.0990

Yesterday, the pound almost closed the day at the opening level, increasingly supporting the resistance level of 1.2420. The signal line of the Marlin oscillator is sideways, but its location

AUD/USD has initially consolidated in the 0.7090-0.7130 range - the body of Thursday's daily candle is fully within this range. The signal line of the Marlin oscillator starts to turn

USD/CAD: downside continuation from below 1.3334

The USD/CAD pair dropped and now is trading at 1.3332. It is challenging the 1.3334 former low which represents a downside obstacle. On the other hand, the downtrend line represents

Technical analysis of EUR/USD for January 26, 2023

Euro parity still in play ahead of decisive US inflation data, for that common currency came within whisker of 1.0845 this week. Right now, the EUR/USD pair is still moving

In the European session, XAU/USD reached 1,949.03, the highest level since April 2022. On the 1-hour chart, we can see that this level coincides with the top of the bullish

Forecast for EUR/USD on January 26. Joachim Nagel: ECB rate will continue to rise

Yesterday, the EUR/USD pair reversed in favor of the euro and started a new expansion in the direction of the level of 1.1000 after rebounding from the bottom line