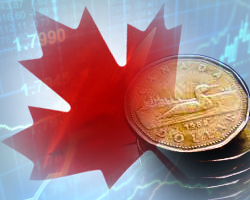 The Canadian dollar slipped against its major counterparts in the European session on Friday, as a data showed that Canadian retail sales decreased for the third consecutive month in January, driven by weak sales at motor vehicle and parts dealers.

Data from Statistics Canada showed that Canada's retail sales fell 0.3 percent month-on-month in January, after a 0.1 percent drop in December. Economists had forecast a 0.4 percent rise.

Separate data showed that the CPI grew 0.3 percent on a seasonally adjusted monthly basis in February, following a 0.1 percent drop in the previous month. Economists were looking for an increase to 0.6 percent.

The currency traded mixed against its major counterparts in the Asian session. While it held steady against the yen and the greenback, it rose against the aussie. Against the euro, it declined.

The loonie fell to 1.3427 against the greenback, its lowest since March 11. The next likely support for the loonie is seen around the 1.36 region.

The loonie dropped to a session's low of 0.9522 against the aussie from yesterday's closing value of 0.9502. The loonie is seen challenging support around the 0.97 region.

The Canadian currency slid to 82.04 against the yen, a level unseen since January 25. On the downside, 80.5 is likely seen as the next support for the loonie.

Data from the Ministry of Internal Affairs and Communications showed that Japan inflation rose 0.2 percent on year in February. That was shy of expectations for an increase of 0.3 percent and unchanged from the January reading.

Core inflation, which excludes volatile food prices, advanced an annual 0.7 percent - again missing expectations for 0.8 percent, which would have been unchanged.

Flash data from IHS Markit showed that Eurozone private sector expanded at the slowest pace in two months in March amid a deepening downturn in manufacturing, defying expectations for a modest improvement.

The flash Eurozone Composite Purchasing Managers' Index rose to a two-month low of 51.3 from 51.9 in February. Economists had forecast a score of 52.