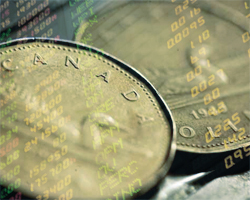 The Canadian dollar slipped against its major counterparts in the early European session on Tuesday, as oil prices weakened following remarks from Russian finance minister Anton Siluanov suggesting an increase in oil production of the nation and OPEC to combat market share with America.

Over the weekend, Siluanov remarked that Russia along with OPEC is likely to decide to boost production to fight for market share with the United States.

U.S. earnings news remain in focus, with Bank of America (BAC), Johnson & Johnson (JNJ) and UnitedHealth (UNH) among the companies due to report their quarterly results later today.

Having advanced to 1.3366 against the greenback at 5:00 pm ET, the loonie reversed direction and declined to an 11-day low of 1.3403. If the loonie rises further, 1.36 is possibly seen as its next resistance level.

Looking ahead, U.K. ILO jobless rate for February ad German ZEW economic sentiment index for April are due in the European session.

In the New York session, Canada manufacturing sales for February, U.S. industrial production for March and NAHB housing market index for April are set for release.