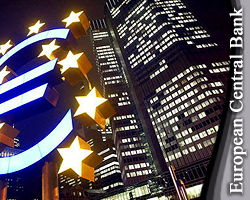 Lagarde, a lawyer who became France's first woman finance minister, is currently the Managing Director of the International Monetary Fund, since 2011.

"I am honored to have been nominated for the ECB Presidency," Lagarde said on Twitter. She has temporarily relinquished her responsibilities as the IMF chief during the nomination period.

The ECB President's 8-year term is non-renewable. Draghi will step down at the end of October on the end of his term.

Lagarde will be the first woman to be at the helm of the central bank for 19 countries that has euro as the currency.

EU leaders also elected Belgium Prime Minister Charles Michel as President of the European Council. He will hold the post for two-and-a-half year until May 31, 2022. The term is renewable once.

Thus, two of the key posts in the European Union will be held by women for the first time.

"A perfect gender balance. I am really happy about it," the outgoing European Council President Donald Tusk said.

"After all Europe is a woman," referring to a princess in the Greek mythology from whom the name of the continent of Europe has been derived. Lagarde's appointment as the ECB chief is almost a done-deal as the European Parliament has no veto on her nomination.

However, Von der Leyen's nomination is already facing opposition from the Socialists and will most likely be challenged in the parliament in Strasbourg.

German Chancellor Angela Merkel had to abstain from the nomination of commission president due to opposition from her party's coalition partners.

If approved, Von der Leyen would be the European Commission's first woman chief and Germany's first commission president in over half a century.

The new EU top brass is set for challenging times as they tackle a host of socio-political issues such as a rise of right-wing nationalism in the region, Brexit, economic slowdown and trade protectionism, to name a few.

Lagarde, whose appointment as ECB chief came as a total surprise, was able to make her mark on a global level during her term as the IMF chief. However, her lack of direct experience of monetary policy could serve as a disadvantage.

The ECB, currently led by Draghi, is at a crucial stage as a slowing euro area economy has forced the bank to abandon plans of tightening, and instead focus on providing more stimulus.

Early June, the ECB extended its forward guidance and now expects interest rates to remain unchanged at least through the first half of next year.

Eurozone interest rates were raised last in July 2011 by 25 basis points, and Draghi is set to be the only ECB President thus far who did not raise rates during his term.

"With Christine Lagarde, the ECB will get another excellent communicator," ING economist Carsten Brzeski said.

ING expects a continuation of a pragmatic monetary policy stance as well as a confirmation of "whatever-it-takes" at the ECB.

"Whether or not the ECB under Lagarde will also be willing to go as boldly as Draghi to where no European central bank has gone before will depend on the new balance of power between Executive Board and national governors," Brzeski added.