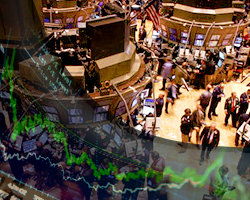 Treasuries moved sharply higher over the course of the trading day on Tuesday, extending the rally seen in the previous session.

Bond prices gave back some ground going into the close but remained firmly in positive territory. As a result, the yield on the benchmark ten-year note, which moves opposite of its price, fell by 4.7 basis points to 1.330 percent.

With the decrease on the day, the ten-year yield closed lower for the fourth consecutive session, ending the day at a record closing low.

Treasuries continued to benefit from their appeal as a safe haven amid continued concerns about the impact of the coronavirus outbreak that has spread far beyond China to Europe and the Middle East.

Another sell-off on Wall Street also contributed to the strength in the bond market, as traders moved their money out of stocks and into treasuries.

Stocks initially moved to upside but pulled back sharply, as fears about the coronavirus outbreak escalating into a pandemic continued to hang over the markets.

Meanwhile, traders largely shrugged off a report from the Conference Board showing a slight improvement in U.S. consumer confidence in the month of February.

The Conference Board said its consumer confidence index inched up to 130.7 in February from a downwardly revised 130.4 in January. Economists had expected the index to tick up to 132.5 from the 131.6 originally reported for the previous month.

"Consumers' short-term expectations improved, and when coupled with solid employment growth, should be enough to continue to support spending and economic growth in the near term," said Lynn Franco, Director of Economic Indicators at the Conference Board.

Bond traders also paid little attention to the results of the Treasury Department's auction of $40 billion worth of two-year notes, which attracted well below average demand.

Data on new home sales is scheduled to be released on Wednesday but is likely to be overshadowed by the latest developments regarding the coronavirus.