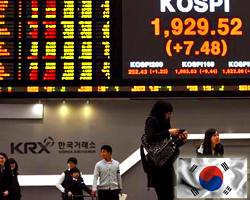 The Bank of Korea will wrap up its monetary policy meeting on Thursday and then announce its decision on interest rates, highlighting a modest day for Asia-Pacific economic activity.

The central bank is expected to hike its benchmark lending rate by 25 basis points, from 0.75 percent to 1.00 percent.

Hong Kong will release October figures for imports, exports and trade balance. In September, imports were up 23.5 percent on year and exports gained an annual 16.5 percent for a trade deficit of HKD42.4 billion.

Japan will see final September figures for its leading and coincident economic indexes; in August, their scores were 101.3 and 91.3, respectively.

Australia will provide Q3 numbers for private capital expenditure, with forecasts suggesting a decline of 2.0 percent on quarter following the 4.4 percent gain in the three months prior.