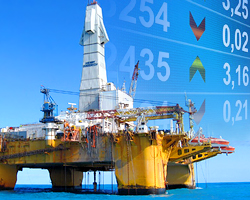 Crude oil prices showed a strong move to the upside in early trading on Wednesday but came under pressure over the course of the session.

With the downturn on the day, the price of crude oil saw further downside after plunging $3.77 or 5.4 percent to $66.18 a barrel on Wednesday.

The pullback by crude oil prices came after the Center for Disease Control and Prevention revealed the first confirmed case of Covid-19 caused by the new Omicron variant has been detected in the U.S.

The CDC said the first confirmed omicron case was detected in an individual in California, who returned from South Africa on November 22, 2021.

"The individual, who was fully vaccinated and had mild symptoms that are improving, is self-quarantining and has been since testing positive," the CDC said. "All close contacts have been contacted and have tested negative."

Oil prices initially benefited from improved risk sentiment ahead of an OPEC meeting where major producers will discuss how to respond to the threat of a hit to fuel demand from the Omicron variant.