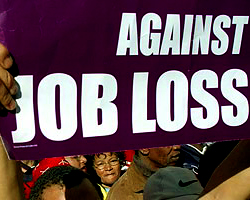 The euro area unemployment rate dropped marginally in October as the economy continued to expand despite supply bottlenecks, data from Eurostat showed on Thursday.

The jobless rate came in at 7.3 percent, as expected, and down from 7.4 percent in September. In the same period last year, the unemployment rate was 8.4 percent.

The number of unemployed decreased 64,000 from the previous month to 12.045 million in October. Compared to last year, unemployment declined 1.564 million.

The unemployment rate among youth aged between 15 and 24 years fell to 15.9 percent from 16.1 percent in the prior month. Compared to September, youth unemployment decreased 9,000.

While labor market conditions continued to improve in October, the recent deterioration of the Covid situation and increased uncertainty due to the Omicron variant are likely to mean the recovery takes a breather over the next couple of months, Stefan Posea, an economist at Capital Economics, said.

But providing that it does not trigger a long period of severe restrictions, the economist expects the euro-zone labor market to make a full recovery in the medium term.

The overall unemployment rate in the EU27 held steady at 6.7 percent in October, data showed.

Data released by Spain's labor ministry showed that unemployment decreased by 74,381, which was the largest drop in the series for the month of November.