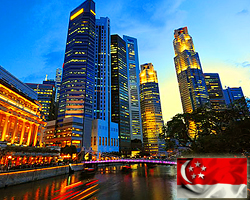 Singapore's non-oil domestic exports were up 6.4 percent on year in April, Enterprise Singapore said on Tuesday.

That was shy of expectations for an increase of 6.7 percent and down from 7.7 percent in March.

On a monthly basis, exports slipped 3.3 percent - also missing forecasts for a decline of 1.3 percent after falling 2.3 percent in the previous month.

NODX to Singapore's top 10 markets as a whole rose in April, mainly due to Taiwan, Malaysia and the US; though NODX to China, Hong Kong and South Korea declined.