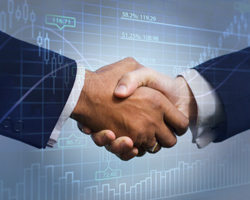 After showing a lack of direction early in the session, treasuries showed a notable move to the upside over the course of the trading day on Tuesday.

Bond prices bounced back and forth across the unchanged line in early trading before climbing more firmly into positive. As a result, the yield on the benchmark ten-year note, which moves opposite of its price, slid 5.6 basis points to 3.469 percent.

The higher close by treasuries came as traders picked up bonds at somewhat reduced levels following the pullback seen over the three previous sessions.

Optimism about the Federal Reserve further slowing the pace of interest rate hikes next week also contributed to the rebound by treasuries following recent comments from Fed officials.

Treasuries saw some further upside after the Treasury Department revealed this month's auction of $42 billion worth of two-year notes attracted well above average demand.

Amid another quiet day on the U.S. economic front, trading on Wednesday may be impacted by reaction to the results of the Treasury's auction of $43 billion worth of five-year notes.