The intraday polarity in the bias of Gold and Bitcoin showed an uneasiness of investors towards putting money in the latter. Morgan Creek Capital co-founder & partner Anthony Pompliano in June projected monetary easing policies as breeding grounds for bitcoin bulls, stating that a drop in the value of fiat currencies would create demand for non-sovereign assets/currencies like bitcoin. Meanwhile, noted economist Alex Kruger said that only speculators – for now – can drive the price of bitcoin higher, not institutional investors.. 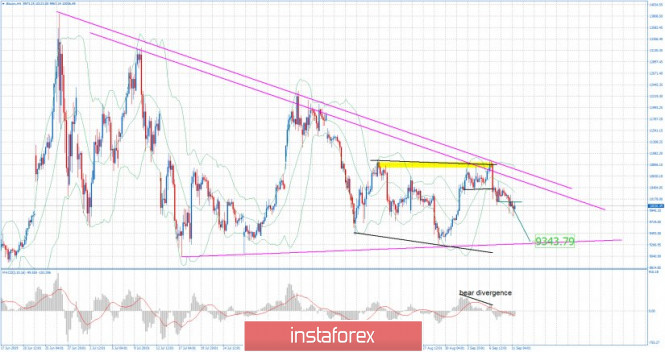 Bitcoin did exactly what I expected yesterday and our downward target is still expected at the price of $9.350

Most recently, I found that there is first lower high and lower low on 4H time-frame, which is indication that short-term down trend is gaining power . There is also rejection of the middle Bollinger band, which adds more potential downside. I still expect potential new wave down for potential fulfill of the lower symmetrical triangle boundary.. Key support is at $9.350 and resistance at $11.000 and $11.200. Bulls need to be very cautious as there is strong aggressive selling from the key resistance. As long as the Bitcoin is trading below $11.200, The level around $10,000 looks like a decent sell zone if you already don't have sell on Bitcoin.

Performed by Petar Jacimovic,
Analytical expert
InstaForex Group © 2007-2020
More articles by this author
Back to the list
Ask the author
E-mail subscription
Benefit from analysts’ recommendations right now
Top up trading account
Get a bonus from InstaForex