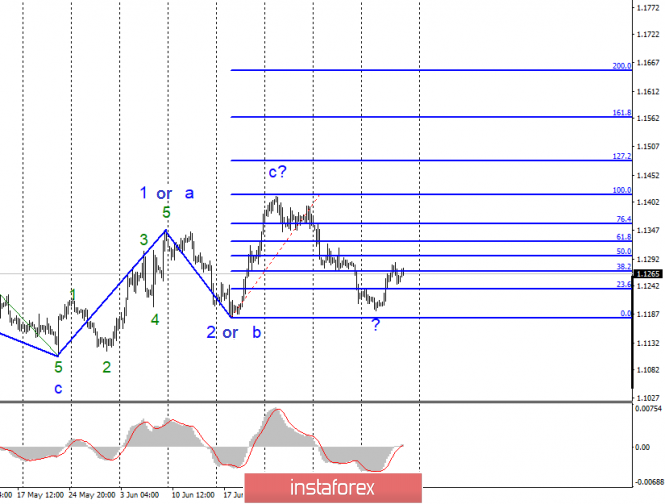 On Thursday, July 11, trading ended with a 5 bp rise for the EUR / USD pair. Thus, the current wave pattern still has chances of resuming the construction of an upward trend, since at least for July 9, one can interpret wave 2 in the future c. If this is true, then the increase in quotations of the euro-dollar pair will continue from the current positions with targets located above the 14th figure. As for the news background, yesterday Jerome Powell confirmed the expectations of the markets and again hinted on the need to weaken the Fed's monetary policy. Thus, the probability of a reduction in the Fed's rate from the current 2.5% to 2.25% at the meeting in late July is now over 90%. By the end of June, inflation in the USA slowed down to 1.6% y / y from 1.8%. Thus, Powell's concerns about weak inflation are not an empty sound.

A pair of euro / dollar presumably remains in the upward trend. I recommend to buy euros with targets located near the estimated marks of 1.1417 and 1.1480, which is equal to 100.0% and 127.2% of Fibonacci, and an order restricting possible losses under the minimum of wave 2 or b. Leaving the tool below the 0.0% level will require making adjustments to the current markup. 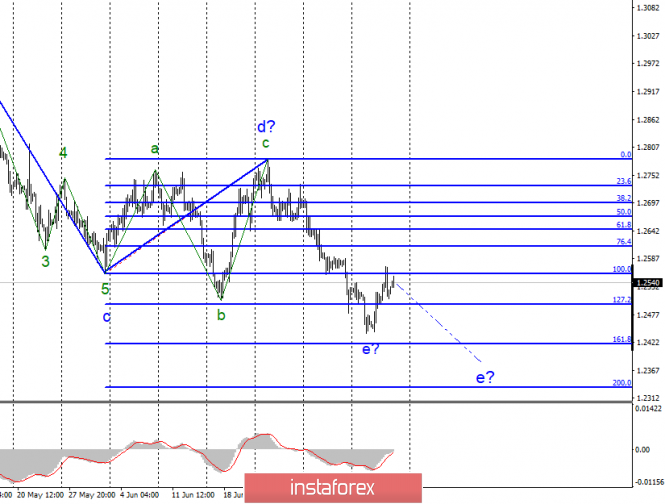 The pair GBP / USD rose on July 11 by 20 basis points and continues to move away from local minima. However, the estimated wave e still does not look fully completed, which suggests a resumption of the decline of the pound sterling in the coming days. The driver of growth and decline in the pair pound-dollar will not occur today. New speeches by Boris Johnson or Jeremy Hunt are possible, but it seems that the British political circles are now fully focused on the election of the prime minister. For the pound, this, unfortunately, does not mean anything. The currency is still not in demand among traders, although in the last two days there were grounds for purchases. Moreover, it is not clear how will the pound sterling grow within the upward trend after the completion of wave e? Or will the wave significantly complicate its internal wave structure?

The wave pattern of the pound / dollar instrument involves the construction of a downward wave e. Thus, I recommend selling the pair with targets located near the estimated marks of 1.2418 and 1.2334, which corresponds to 161.8% and 200.0% in Fibonacci, when the MACD signal is down.