Overview of EUR/USD on August 21st. Forecast according to the "Regression Channels". The focus of the market: minutes of the Fed meeting 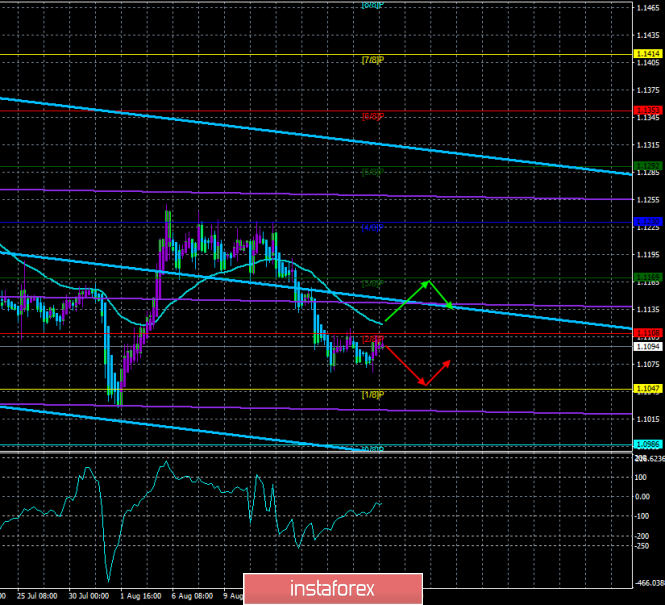 The upper channel of linear regression: direction – down.

On August 21, the EUR/USD currency pair began a new round of upward correction to the moving average line. Today, as yesterday, no important macroeconomic publications are planned in the States and the eurozone. Late in the evening, the minutes of the last FOMC meeting will be released. However, as we have already pointed out to traders before, these protocols rarely cause a market reaction. The thing is that the protocols usually contain information that market participants already know. Accordingly, the publication of the protocol turns into a loud enough event, but almost meaningless. What can we expect from the FOMC protocol today? From our point of view, nothing special. The Fed, led by Jerome Powell, made it clear that Trump would not follow suit and thoughtlessly cut rates too. If macroeconomic indicators continue to deteriorate, then we will be talking about a new easing of monetary policy. While this is not the case, Powell and the company will leave monetary policy unchanged. The only thing that can be learned from the evening publication is the mood of each member of the monetary committee. Although their attitude can be understood from the individual interviews. For example, the last speaker was the head of the Boston Fed Eric Rosengren. He said that he is not ready to support the further reduction of the key rate, as he sees no signs of deterioration of the macroeconomic situation in the United States over the past month. Rosengren also believes that it is dangerous to reduce the cost of loans and stimulate the population to lend at this time. "I want to make sure that we are going in the direction of slowing the economy before voting for a rate cut," Rosengren concluded. The euro/dollar is still prone to fall. Only overcoming the resistance will break the euro for some time.

The euro/dollar pair started a new round of correction. Thus, it is recommended to wait for the reversal of the Heiken Ashi indicator down, which will indicate the completion of the correction, and sell the euro with the targets of 1.1047 and 1.0986. Purchases of the euro/dollar pair are still fraught with increased risks.

CCI – the blue line in the indicator window.

The moving average (20; smoothed) – blue line on the price chart.