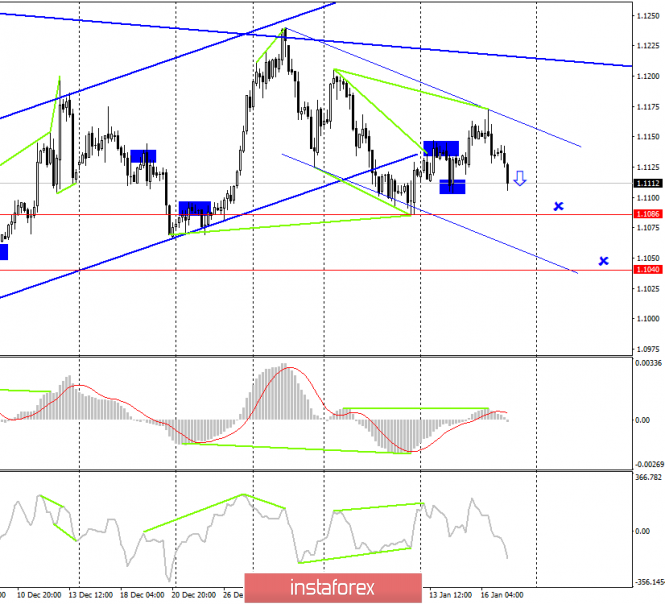 As seen on the 4-hour chart, the EUR/USD pair performed a reversal in favor of the US currency and resumed the process of falling in the direction of the low level of 1.1086. A new downward trend corridor has been formed, which now points to the "bearish" mood of most traders. The reversal of quotes in favor of the US dollar occurred with some delay, I was waiting for it 1-2 days earlier. However, in this case, it turned out not so bad, and now I expect a fall to the lower line of the corridor - 1.1040 (approximate goal). A bearish divergence was also formed for the MACD indicator, which also worked in favor of the US currency. The report on inflation in the European Union was not weaker than forecasts, but not stronger than them. Inflation was 1.3% y/y in December, which remains far from the ECB's target level, which is now 2.0% but can be lowered in the future. Now the main thing is that the information background from America does not scare off bear traders from the plan. In the US, the consumer confidence index and the level of industrial production will be released today.

Forecast for EUR/USD and trading recommendations:

The long-term trading idea remains in force, as the pair's quotes performed a consolidation under the upward small corridor on the 24-hour chart. Traders still have a target for a fall near the level of 1.0850. Terms of execution - 2-3 weeks.

The new trading idea is to sell the pair with the targets of 1.1086 and 1.1040 since the trend on the 4-hour chart is again "bearish". These levels are the two local lows.