Analysis of EUR/USD and GBP/USD for January 24. EU's economic statistics may help eurocurrency 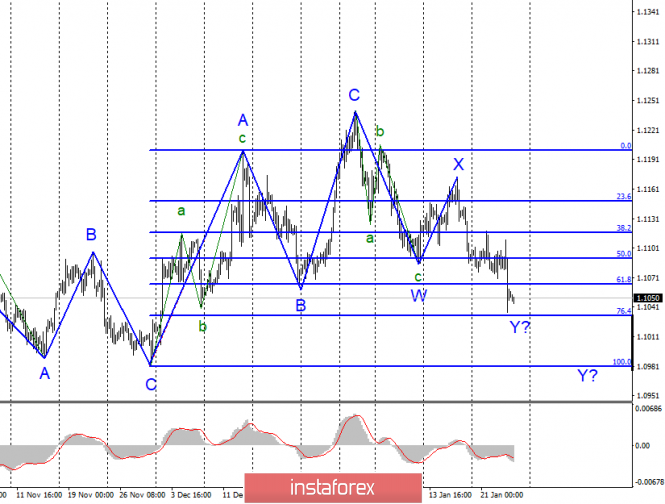 On January 23, the EUR / USD pair lost about 40 basis points. Thus, the construction of the alleged wave Y as part of the bearish trend section, continues with the targets located near the levels of 76.4% and 100.0% Fibonacci. If this assumption is true, then the decline in quotes of the instrument will continue after a successful attempt to break through the level of 76.4%. On the contrary, an unsuccessful attempt to break through this level will lead to quotes moving away from the lows reached, but, most likely, the construction of wave Y will continue.

The news background for the instrument was very interesting on Thursday. I already said yesterday that the speech of Christine Lagarde made the markets declined after the ECB meeting, if not into a state of shock, then thoroughly spoiled their mood. In short, Lagarde's argument was that inflation remains extremely weak, and until it reaches the ECB target levels (about 2.0% y / y), there will be no talk of tightening monetary policy. In addition, Lagarde noted the weakness of the industrial sector, "inhibiting the economy of the European Union." And to top it off, she acknowledged that the ECB is wary of geopolitical tensions, which are expressed by current and future trade wars. Thus, the demand for European currency seriously fell yesterday in the afternoon. Today, on Friday, a slight departure of quotes from the lows reached is possible, but everything will depend on the news background, as several quite important economic reports will be released today in the Euro zone and America.

The most interesting are probably reports on business activity for January (not final values) in Germany and the eurozone. Market expectations are as follows: a slight increase in all business activity indices in both Germany and the EU. The biggest questions are caused by indices in the manufacturing sectors, which are deep below the 50.0 level, below which it is believed that the industry is in decline. However, in any case, an increase in indicators is positive news for the euro. Now, it remains only to wait for the reports themselves and to make sure that the indices have really grown, because otherwise, the demand for the euro may decline even more.

The euro-dollar pair is supposedly continuing to build a downward set of waves. Thus, I would recommend continuing to sell the instrument with targets located near the levels of 1.1034 and 1.0982, which corresponds to 76.4% and 100.0% Fibonacci. 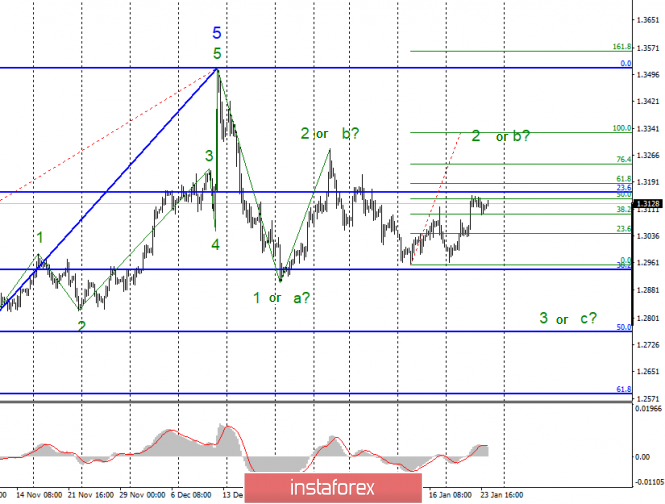 On January 23, the GBP / USD pair lost about 20 basis points, but at the same time, it continues to remain within the framework of the construction of the alleged wave 3 or c, which takes a very complex and extended form. An alternative wave marking has also appeared, which identifies the trend section since December 23 as complex wave 2 or b, which takes on a distinct three-wave structure. Thus, the goals of the internal wave c in 2 or b can be located up to the level of 1.3329, which corresponds to 100.0% Fibonacci of wave a in 2 or b. After the completion of the construction of this wave, it is still expected that the quotes of the instrument will decrease within the framework of building 3 or c.

There was no news background for the GBP / USD instrument on Thursday. The trading amplitude of the pound / dollar instrument was not high, but the situation may change today, since there will be quite important reports on business activity in the UK and, it will be released in the USA after lunch. Moreover, business activity in the manufacturing sector may increase to 48.9, and in the services sector - up to 51. As well as in the eurozone, this will be positive news for Britain. In the afternoon - business activity indices in all areas of the United States. Forecasts are less optimistic than on the British and European indices. Nevertheless, a slight improvement is also expected. Thus, today, the dynamics of the instrument will entirely depend on economic reports.

The pound / dollar instrument continues to build a new downward trend. I recommend selling the instrument with targets near the levels of 1.2941 and 1.2764 again, which corresponds to 38.2% and 50.0% Fibonacci, with the new MACD signal "down" if it is formed around the level of 23.6 % Fibonacci. The instrument can complicate wave 2 or b, therefore, the increase can continue to 1.3329 (in case of a successful attempt to break through the 23.6% Fibonacci level), and sales are then recommended to be considered much higher.