EUR/USD. January 28. Results of the day. US macroeconomic statistics supported the dollar 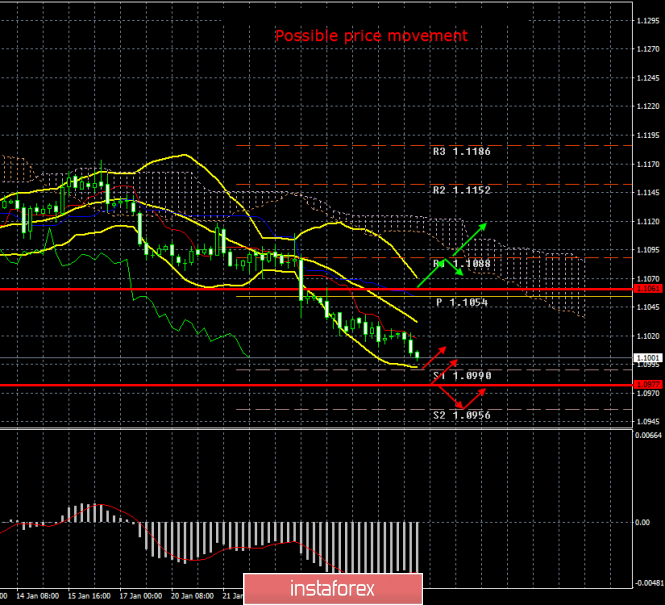 Average volatility over the past 5 days: 42p (average).

The first trading day of the week was completely empty in terms of macroeconomic events. However, today traders already had something to turn their attention to. The volatility during the day, however, has not grown much and is currently at least 28 points, but given the fundamental background of today, there is still reason to believe that the indicator will still reach an average of 42 points. Bears continue to hold the market in their hands, there is no talk of any correction, although the MACD indicator has turned up. But since there was no parallel increase in price, we believe that the indicator simply started to discharge, since it has nowhere to decline further - the downward movement of the euro/dollar pair, although weak, is recoilless. The immediate goals for the euro are levels 1,0990 and 1,0977, each of which can trigger the beginning of an upward correction, which has been brewing for two days. However, at the same time, we would like to note that if the movement is very weak and at the same time trendy, then it can continue for a very long time and without corrections. It is best to pay attention to the Kijun-sen line, which in such cases follows the trend well and is the reference line for this trend itself.

In fact, traders were interested in only one macroeconomic report today and it was extremely controversial. Now it's easy to guess that the reaction of traders to this report was to sell the euro/dollar pair, respectively, it was at least not a failure. Although, as we have said, it can be interpreted in different ways. This report is for durable goods orders. It is important because the production of durable goods (for example, automobiles) requires serious investments, and the goods themselves are expensive, respectively, their sales volumes significantly affect the economy. So, the most significant indicator showed an increase of 2.4% in December against the previous value of -2.0% and the forecast of + 0.5%. It seems that it was precisely on this indicator that traders paid the most attention, which is completely logical. The second most important indicator is orders for capital goods, excluding the defense and aviation sectors. These goods are intended for the production of other goods and services with a service life of at least three years. This indicator decreased by 0.9% in December, although the forecast predicted a zero change compared to the previous month. Next, orders were published excluding transport (decreased by 0.1% with higher forecasts) and excluding the defense sector (decreased by 2.5%). In general, all derivatives of the main report were reduced, some by very impressive values. This is probably why the strengthening of the US currency is quite restrained.

What conclusions can be drawn from this report? Twofold. On the one hand, the main indicator - did not disappoint. On the other hand, other indicators disappointed. Once again, we are forced to think about a possible new slowdown in the US economy, as the latest macroeconomic statistics indicate a decline in some indicators, such as industrial production or business activity in the manufacturing sector. Of course, this is still not enough to make louder conclusions, however, these figures may cause concern not only for ordinary traders, but also the Federal Reserve, which previously announced that there might not be any changes in monetary policy parameters until mid-2020. Tomorrow will be the summing up of the January meeting of the Fed. The probability of a rate cut is zero. However, in light of the latest macroeconomic statistics, new information may be heard at a press conference by the Federal Open Market Committee. No other important events or reports are contained in the calendar for tomorrow; the very announcement of the results of the Fed meeting will take place late in the evening.

Based on the foregoing, calm trading is expected almost tomorrow evening until tomorrow. In the evening, the source of the imbalance in the market might come from Jerome Powell's speech, and then only if he expresses his fears or notes the worsening statistics.

EUR/USD continues to move down. Thus, it is recommended to hold open short positions with the targets of 1.0990 and 1.0977, until the start of the correctional movement (rebound from any target or the MACD indicator upward with a parallel increase in price). It will be possible to consider purchases of the euro/dollar pair not earlier than the Kijun-sen line in small lots with the goals of the resistance level of 1.1088 and Senkou Span B line.