Overview of the GBP/USD pair. February 14. The pound is once again dominated by political intrigues, while the economy remains in the same state 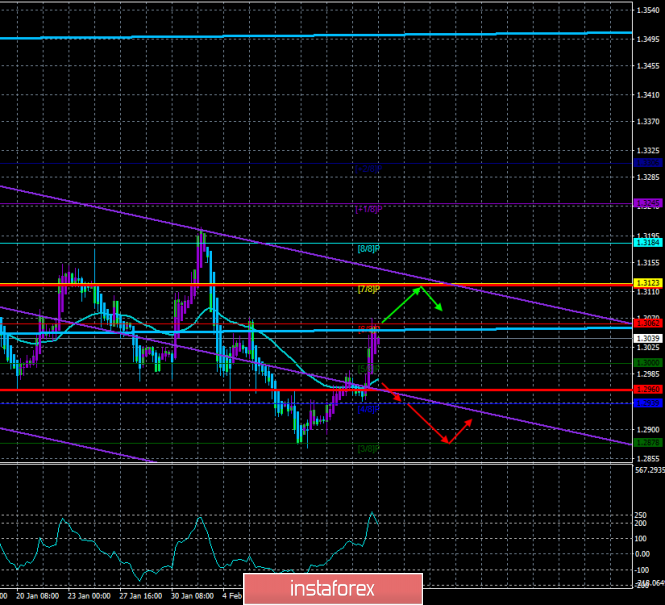 The GBP/USD currency pair continued its upward movement on February 13 and broke the moving average line, which changed the trend to an upward one. Quite an unexpected turn, given the fact that macroeconomic statistics from overseas continue to come quite strong, and from the UK – quite weak. However, the pound seems to have taken over the disease of the euro, which in recent months has regularly bounced up without any reason, approaching important support levels. Now the picture is similar for the pound – all the fundamental and macroeconomic factors speak in favor of a new fall in the British currency. But instead, traders react to the most significant and frankly political news and as a result, the pound shows growth again. If you carefully examine all the periods of growth of the British currency over the past two years, it becomes clear that each time this was either political events, or favorable expectations of the markets regarding some political event, or simple rumors, which in most cases were not even confirmed. Yesterday, we witnessed another batch of political upheavals in the UK government, to which traders reacted as if Boris Johnson had signed a trade agreement with the European Union, and then immediately personally with Donald Trump. Although in practice, what happened was that Finance Minister Sajid Javid resigned from his post. What is surprising if more than a dozen Ministers have already resigned during the "Brexit period", the government has changed several times, the Prime Minister who started Brexit was David Cameron, then Theresa May came to power, after her - Boris Johnson? That is, three Prime Ministers have changed in the UK in three years, and more recently there were rumors that Johnson would not last in this post for long. Especially if you remember the court proceedings of last autumn, when Johnson openly blocked the work of Parliament, hoping that this will help him to implement a "hard" Brexit without hindrance. Thus, the voluntary resignation of the Finance Minister is not out of the ordinary, even amid disagreements with the Prime Minister (Boris Johnson insisted that Javid dismiss all his advisers). Just ordinary and regular political changes in the British government and that's it. In addition to Javid, legal adviser Geoffrey Cox, Northern Ireland Secretary Julian Smith, Business Minister Esther McVey, Housing Minister Andrea Leadsom and Environment Minister Theresa Villiers were dismissed. Thus, the Prime Minister began a global reshuffle. According to experts, Boris Johnson took this step in order to reduce the number of participants in Cabinet meetings, which are attended not only by Ministers themselves but also by their deputies, which complicates the decision-making process. And of course, Johnson wants to fill the Cabinet with his supporters. Whatever it was, even such information does not solve the UK's problems in any way, does not make its economy more powerful, does not level its costs associated with Brexit, does not solve issues with Scotland, Gibraltar and Ireland, does not advance the country in negotiations on trade agreements with the European Union and the States. Thus, from our point of view, the composition of the Cabinet of Ministers has changed, but, in fact, nothing has changed.

Today, February 14, traders will have to focus on American macroeconomic statistics, but it is likely that the political background will overshadow the fundamental one. At least yesterday, inflation in the United States provoked a new fall in the euro currency, but the pound simply ignored this report. Something similar may happen on Friday when no economic data is expected from the UK, and important information will again arrive from overseas. Thus, it is still not necessary to lose sight of technical indicators that are still signaling an upward trend, however, only in the short term. At the moment, the pound/dollar pair rose to the Murray level of "6/8" - 1.3062 and failed to overcome it. Tomorrow, we will expect a downward correction, unless the US statistics fail. 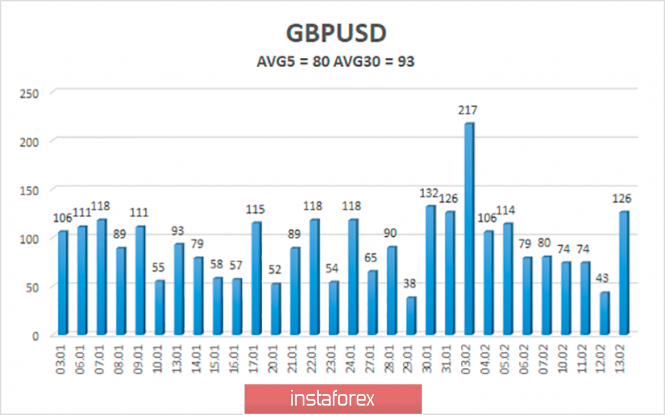 The average volatility of the pound/dollar pair has decreased to 80 points over the past 5 days. According to the current volatility level, the working channel on February 14 will be limited to the levels of 1.3120-1.2960. A downward correction would be very logical on Tuesday, but in any case, it is recommended to wait for the Heiken Ashi indicator to turn down.

The GBP/USD pair continues its upward movement. Thus, it is formally relevant to buy the pound with the target of 1.3120, if a downward correction does not begin in the near future. However, we still do not see what the British currency can do for growth now. It is recommended to return to more reasonable sales of the British currency after fixing the price below the moving average line with the first targets of 1.2939 and 1.2878.

In addition to the technical picture, you should also take into account the fundamental data and the time of their release.

Explanation of the illustrations:

The highest linear regression channel is the blue unidirectional lines.

The lowest linear regression channel is the purple unidirectional lines.

Possible variants of the price movement: