GBP/USD: plan for the American session on February 14. Bears install the correction of the pound. The level of 1.3052 remains the bullish target for the end of the week

In the morning review, I paid attention to the probability of forming a false breakdown in the resistance area of 1.3052, which the bears achieved in the end, and the bulls did not force events before the release of important statistics on the volume of retail sales in the United States. The task of buyers of the pound remains to break through and consolidate above the resistance of 1.3052, which will open a direct road to the area of the highs of 1.3093 and 1.3133, where I recommend fixing the profits. A more optimal scenario for opening long positions will be a downward correction to the support area of 1.3010, provided that a false breakdown is formed there or purchase for a rebound after the support test of 1.2967, where the lower border of the new ascending channel formed on February 10 also passes.

Sellers achieved the formation of a false breakdown and almost reached the level of 1.3010, but the test did not take place. In the second half of the day, everything will depend on the US data, and only a break with consolidation below this range will open a direct road to the lows of 1.2967 and 1.2928, where I recommend fixing the profits. If buyers regain the resistance of 1.3052, then short positions in GBP/USD are best postponed until the test of the maximum of 1.3093 or sell even higher on a rebound from the resistance of 1.3133.

Trading is conducted around the 30 and 50 daily averages, which keep the pair from falling and keep the market bullish.

A break of the upper border of the indicator at 1.3060 will lead to a new wave of pound growth. 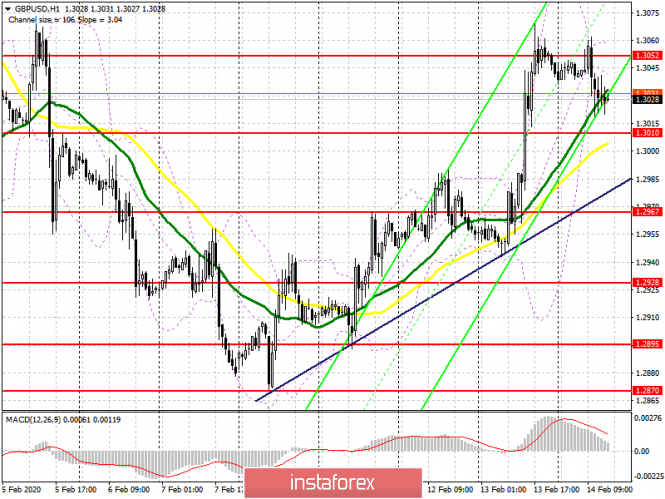