EUR/USD. Preview of the new week. Dull week - euro's chance to move away from three-year lows? 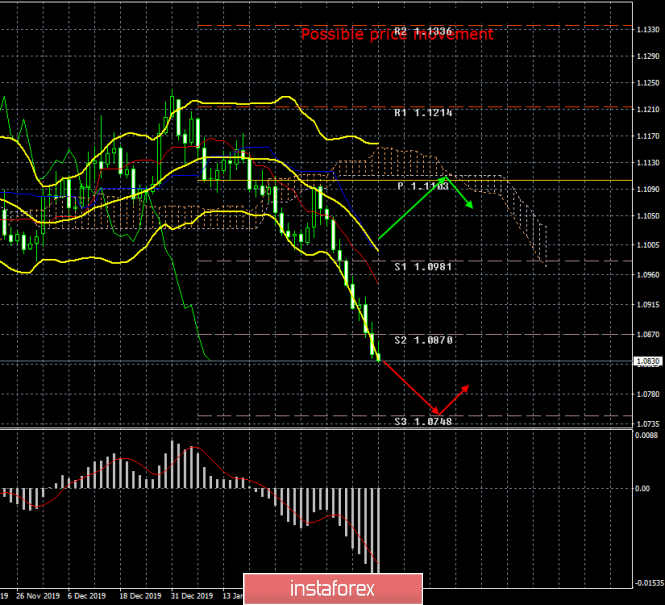 The euro has been falling non-stop in the past two weeks. Last week, the pair overcame the second support level of February at 1.0870 on the 24-hour timeframe and indicated a desire to continue the downward trend. We have already said that the euro's depreciation is absolutely logical from a fundamental point of view. We have been talking about this non-stop in the last few months, since the euro has no fundamental and macroeconomic growth factors. From time to time, purely technical corrections (different in strength) occur, after which the downward movement resumes. Actually, this situation has not changed at all last week. Only one important assumption can be made: the paradoxical situation has finally ceased to keep the euro from falling further. The pair immediately updated its two-year lows and reached the values on April 17, 2017, that is, in fact, it will now move to the lows for the last 17 (!!!) years, which are around 1.0339. About 500 points remain until this level is reached - the task is absolutely feasible for bears for 2020, especially if macroeconomic statistics from the European Union continue to deteriorate further.

The new trading week may finally become a correction for the European currency. However, I immediately want to warn traders that until you receive specific signals about the beginning of the correction, you should not rush to close short positions. Such a not too strong movement can last a very long time. In terms of macroeconomic data, the coming week will be extremely scarce. It is precisely in this, we believe, that the chance of the euro currency lies. In the last two weeks, weak reports were regularly received from the EU, and strong reports from the US, which supported the desire of traders to continue selling the euro. There will be practically no important planned publications or events next week in the first four trading days.

The EU calendar is simply empty on Monday and Tuesday, except for a secondary indicator - the ZEW Institute economic sentiment index. President's Day will be celebrated in the United States on Monday. Secondary data will also be published on Tuesday, such as the index of the market value of housing and the index of business activity in the manufacturing sector of the Federal Reserve Bank of New York. Traders are also unlikely to turn their attention to this data. The EU news calendar will remain equally empty on Wednesday, and secondary data will again come from across the ocean, such as a producer price index and data from the construction market on changes in the dynamics of construction projects and building permits. A more or less significant event will take place in the evening. The event with a loud sign is the publication of the minutes of the meeting of the Fed Open Market Committee. However, we consider this event to be equally secondary. Firstly, in 95% of cases, all the necessary information becomes available to the market on the day the results of the Fed meeting are announced, of which there are eight in a year. Therefore, the minutes become a simple formality that lists the main points of the regulator regarding the economy and monetary policy. Secondly, at this time, even surprises from the Fed or Jerome Powell should not be expected. Judging by the recent speeches of Fed chief in the US Congress, Powell is more concerned about the "coronavirus" than any internal problems, such as GDP or industrial production. Thus, the release of the minutes may remain, if not without attention, then almost certainly without reaction from traders.

On Thursday, the macroeconomic background for the EUR/USD pair will not change, more or less, there will not be any significant report in the EU and the US there will again be secondary publications of applications for unemployment benefits and the production index of the Federal Reserve Bank of Philadelphia. Finally, Germany, the EU and the US will publish business activity indices for February (preliminary values) on Friday, February 21, as well as the consumer price index in the euro bloc for January. As we have already said many times, business activity in the manufacturing sector is of most interest now, moreover, in Germany, the EU, and the US. According to forecasts, no special changes in the business activity of the EU are planned. Both indicators will remain below the key level of 50.0, which will continue to indicate a decline in production. Moreover, in Germany and the EU, business activity indices are again expected to decline to 44.8 and 47.5, respectively. As for inflation, according to experts' expectations, this indicator can grow to 1.4% in annual terms, but in monthly terms it can drop immediately by 1.0%. Thus, as we see, even based on forecasts, next week we should not expect strong macroeconomic support for the euro. The situation in the US is much better, as usual. Business activity in production may slightly fall, but it will remain above 50.0. We are talking only about the Markit index, and we remember that there is also the ISM index, which is more important. As for business activity in the service sectors, a slight fall is expected in Germany and the EU, but both indicators will remain above 50, and no changes are expected in the US, the forecast is 53.4.

As a result, we can say that next week there will be extremely few significant events, so it is likely that the start of an upward correction is still the same, this is one, a decrease in volatility, these are two. As for the support of the euro, it is likely to continue to be absent.

The trend for the euro/dollar pair remains downward. Thus, on the 4-hour timeframe, it is recommended to continue to consider short positions until signals appear regarding the beginning of an upward correction, which is very likely in the new week. On a 24-hour timeframe, the pair may also begin to adjust, but here it will be much more difficult to catch the correction.