EUR/USD and GBP/USD. February 17. Results of the day. French Foreign Ministry warns of difficult negotiations and war over "British waters" 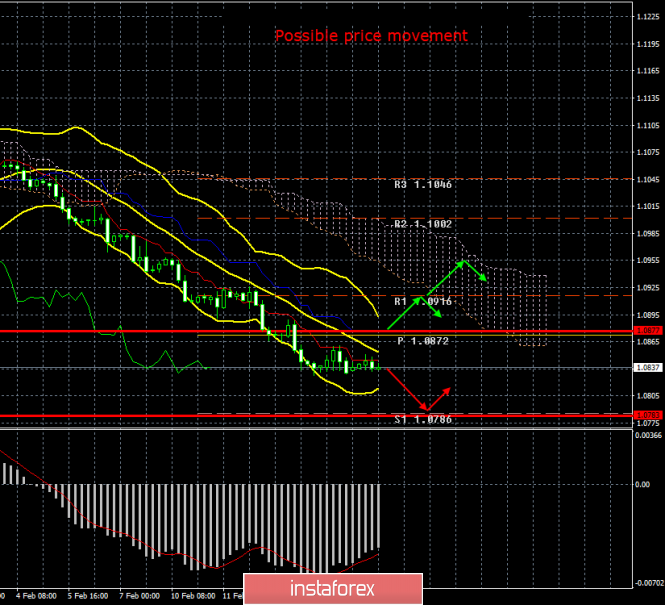 Average volatility over the past 5 days: 47p (average).

The EUR / USD currency pair was not able to start an upward correction on Monday, February 17, although no important macroeconomic events were planned for the day. Thus, bulls continue to be absent from the market for the third week in a row. The euro/dollar pair does not have enough strength to move away from three-year (!!!) lows by at least 50 points, and the euro's total fall in recent weeks is already 260 points. Traders were simply resting throughout the day, not selling or buying the pair. Low volatility (29 points at the moment) absolutely clearly characterizes the fundamental background of Monday. However, we are most interested in answering the question of when the corrective movement will begin and under what conditions. One gets the impression that it will begin abruptly, upon reaching any level at which large purchase orders are located. Thus, one thing can now be ascertained with certainty. Bears continue to dominate the market, the pair is likely to continue to fall, despite the fundamental background.

We have already said that today there were no macroeconomic publications in the EU or the US, even secondary ones. President's Day is being celebrated in the States today, and all banks were closed. Thus, we now consider it appropriate to continue to trade lower, or rather, to maintain short positions already opened earlier, since there are still no signs of the beginning of a correction. It is unlikely that they will appear tomorrow, since the calendar of macroeconomic events does not contain anything interesting on February 18. Thus, we believe that as long as the price is trading below the Kijun-sen critical line, we can continue to hold open sell positions. Moreover, the downward trend movement is rather weak, so the Kijun-sen line is constantly kept close to the price. 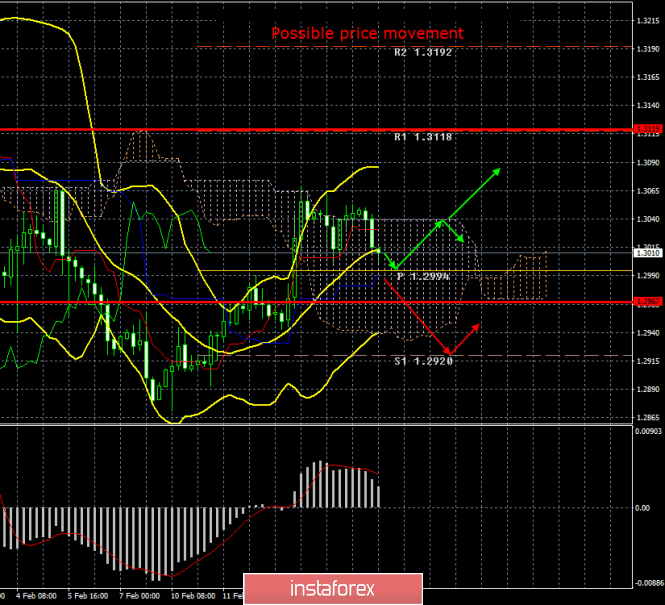 Average volatility over the past 5 days: 76p (average).

At the same time, the British pound began to adjust against the upward trend that has developed in recent days. The pound/dollar pair, in fact, could not overcome the Senkou Span B line of the Ichimoku indicator and will now try to resume the downward trend. We said in recent reviews that the British currency still has no good reason to go up against the dollar. But there are plenty of reasons for it to become cheaper against the US currency. For example, today it became known that negotiations between London and Brussels are becoming more complicated, before they even begin. As we mentioned in previous reviews, the positions of London and Brussels are obvious. London wants a trade deal and does not submit to the European Union in any area, that is, to distance itself from the bloc as much as possible, and the EU wants to continue to influence as many spheres of life in Great Britain as possible and in return offers a profitable trade deal. It is precisely taking into account the fact that the parties are still at different poles, we still believe that there will be no trade deal. And it seems that we are not the only ones who think so, but also most of the world's experts. Sources close to Boris Johnson's office said today that London considers Brussels' desire to force Britain to continue to comply with European standards after Brexit as "ridiculous". This applies to all norms, but, in particular, we are talking about the norms of state subsidies and tax standards. It is easy to guess that Brussels wants London to continue to comply with European rules in these areas, as it wants to highly protect European companies from unfair competition from the British. The British government also noted that neither Canada nor Japan were subject to such requirements by the European Union, however, it concluded trade agreements with them. The source reiterated that Britain will not take on the responsibility of strictly adhering to European norms and standards. Well, Johnson's position personally confirms this information: if the EU'S proposal does not suit London, then Johnson is ready to curtail any negotiations with the EU and leave the bloc without a deal. That is, in fact, there will be Brexit "without a deal."

At the same time, French Foreign Minister Jean-Yves Le Drian said that he also considers future negotiations between the bloc and the UK extremely difficult. "I think that we will tear each other apart in the negotiations," said Jean-Yves Le Drian. "However, this is an absolutely normal phenomenon, each side will protect its interests," the foreign minister stressed. The head of the French Foreign Ministry also noted that the chances of concluding a trade deal before the end of 2020 are few. France is also firm in its position, which is expressed by the desire to continue to fish in British waters. Great Britain wants to limit or even completely exclude the access of other states to "its waters." In addition, it is also reported that almost 80% of imported food products from the UK come from the EU. The retailer community has already warned Johnson's government that a number of food products could skyrocket in the UK if a trade deal cannot be reached. A shortage may form for certain products.

In general, as we said earlier, the UK, led by Johnson, is rushing at all times to the "hard" Brexit. Naturally, nothing changes for the GBP/USD pair in the fundamental plan, so the pound will still be prone to fall. Therefore, each sell signal from Ichimoku is a strong priori. From a technical point of view, the pound continues to adjust, but is located above the Kijun-sen line, so the upward trend continues.

The EUR/USD pair keeps the downward movement. Thus, it is now recommended that you stay selling the euro with a target support level of 1.0786. The MACD indicator is discharging again. It will be possible to consider purchases of the euro/dollar pair in small lots with the goal of the Senkou Span B line, if traders manage to gain a foothold above the Kijun-sen line, which is not expected in the near future.

GBP/USD began to adjust against the upward trend. Thus, it will be possible to sell the British pound with targets at levels of 1.2967 and 1.2920 only after the price has consolidated below the critical line. Buying the pair of small lots can be considered with a target of 1.3118 if traders overcome the Ichimoku cloud, but it should be understood that the fundamental factors do not remain on the side of the British currency.