The fundamental background for the British currency remains very controversial: the pound is gradually losing ground today following a surge of optimism last week. Given the rather harsh rhetoric of the representatives of London and Brussels, it can be assumed that the downward trend will continue. In addition, tomorrow's data on the growth of the UK labor market may also put pressure on the GBP/USD pair, especially if the average earnings level disappoints. Key indicators of UK inflation and retail sales data will also be published this week. All these reports will complement the overall fundamental picture for the GBP/USD pair. 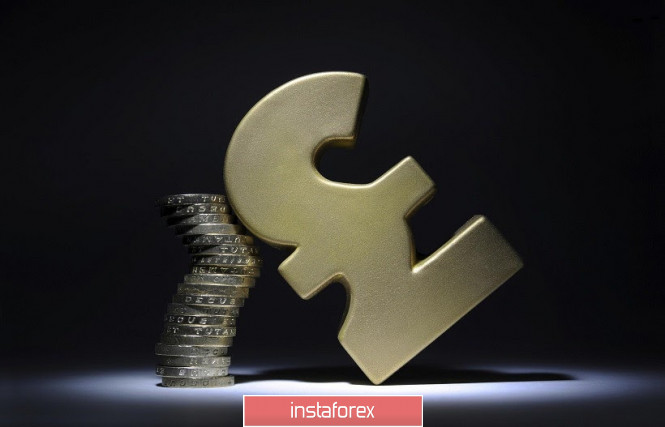 But let's start with politics. As you know, over the past few years (to be more precise, since 2016), the pound has been trading in its "coordinate system", sharply reacting to the news flow regarding Brexit's prospects. Now Brexit is behind us, but the degree of intensity is still high: negotiations during the transition period began with harsh statements, both from the Europeans and the British. Boris Johnson recently threatened to leave the negotiation process, while Brussels promised Spain support in the matter of territorial claims regarding Gibraltar. Today, a kind of "exchange of pleasantries" continued: French Foreign Minister Jean-Yves Le Drian said that both sides are far apart on a number of issues. However, he warned the UK that she should expect a "bloody battle" in the upcoming talks. The Foreign Minister of France also repeated the words of the head of the European Commission that it would be difficult for Britain to achieve the goal of concluding a free trade deal before the end of the year.

It is worth noting that the French have always expressed a tougher stance towards the British compared to other Europeans. For example, at the time, Paris was always hostile to the idea of postponing Brexit and extending the negotiation process. Only at the last moment did the French support the common decision of the leaders of the EU countries. Judging by the first comments by French officials, the upcoming talks will indeed become a real diplomatic test.

Meanwhile, the British retail consortium, in a published statement, warned that consumers could face higher costs and reduced availability of goods if a free trade deal was not reached by the end of the year. Representatives of the consortium recalled that 80% of all food products imported by British retailers came from the EU, and this fact makes these negotiations "especially important for these essential goods". Such a remark against the backdrop of harsh statements by Paris put background pressure on the pound.

In the coming days, the attention of GBP/USD traders will switch to macroeconomic reports - unless, of course, British and European politicians increase the verbal pressure on the currency. If you exclude this scenario, the upcoming releases may have a significant impact on the pair. Let me remind you that the Bank of England unexpectedly maintained an "optimistic and expectant" position at its last meeting, contrary to the pessimistic forecasts of most experts. Nevertheless, the English regulator did not rule out a reduction in the interest rate in the foreseeable future, and two members of the Committee have already voted for this decision for several meetings. And if key indicators this week come out in the red zone, then the likelihood of monetary policy easing this spring will increase again.

Key data on the growth of the labor market in Britain will be released tomorrow, February 18. According to general forecasts, the unemployment rate will remain at a record low of 3.8%. However, the number of applications for unemployment benefits may significantly increase - up to 22 thousand. Salaries can demonstrate a downward movement: the increase in the average earnings should slow down to 3.1% with premiums and up to 3.3% without them. If the inflationary component of tomorrow's release comes out in the red zone, the pound will come under significant pressure, especially in anticipation of the publication of basic inflation data.

We will find out the growth dynamics of the British consumer price index on Wednesday, February 19. Preliminary forecasts are contradictory: the overall index on a monthly basis should slow down to -0.4%, and in annual terms, grow to 1.7% (after a decline to 1.3%). Core inflation can also grow up to 1.5%. For bulls of the pair, it is important that inflation data come out at least at the forecast level, otherwise the bears will get a weighty argument for selling the pair. 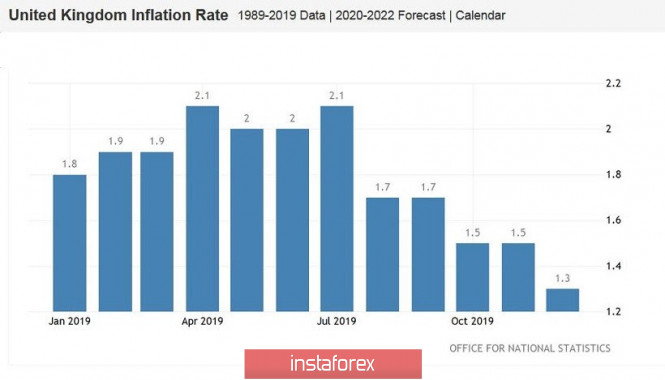 Data on retail sales in the UK will be published on Thursday. This release will be the last puzzle that will form the overall fundamental picture for the pound. According to general forecasts, retail sales will please GBP/USD bulls: on a monthly basis, the indicator will leave the negative area where it has been for the past three months (both taking into account fuel costs and excluding this component). A slight slowdown is expected in annual terms.

Thus, according to preliminary forecasts, key macroeconomic reports will show mixed dynamics. If the releases turn out to be one-way, then the volatility for the GBP/USD pair will be much higher: by the end of the week, the probability of a rate cut at the March meeting will either increase or decrease even more. From a technical point of view, the pair is also at a crossroads - on the daily chart, the price is located on the middle line of the Bollinger Bands indicator, and the trend indicators have not formed any clear and unambiguous signals. From a fundamental point of view, a similar picture has developed: traders are waiting for information drivers that will push the pair either into the region of 28-29 figures, or towards the 31st price level.