Analysis and forecast for GBP/USD on February 18, 2020

In this article, we will look at the technical picture for the pound/dollar pair and identify the most important events that can affect the price dynamics of this instrument.

Let's start with macroeconomic statistics and events, and then move on to the technical picture and trading recommendations.

The UK is expected to release data on the labor market, consumer price index, retail sales, as well as the PMI index. As you can see, the British currency will have a busy week, these data are important, and they will undoubtedly have an impact on the British currency rate.

No less macroeconomic data is expected from the US. Rather, more reports will be submitted from the United States. I don't see any point in listing all of them here; data from the US can easily be found in the economic calendar.

However, it is necessary to recall one main event. Tomorrow at 20:00 (London time), the US Federal Reserve will publish its FOMC minutes. Market participants always closely study the Fed's minutes, hoping to catch a signal for the next steps of the world's most influential central bank.

I think it's time to start analyzing the price charts of the GBP/USD pair and let's start with the weekly timeframe. 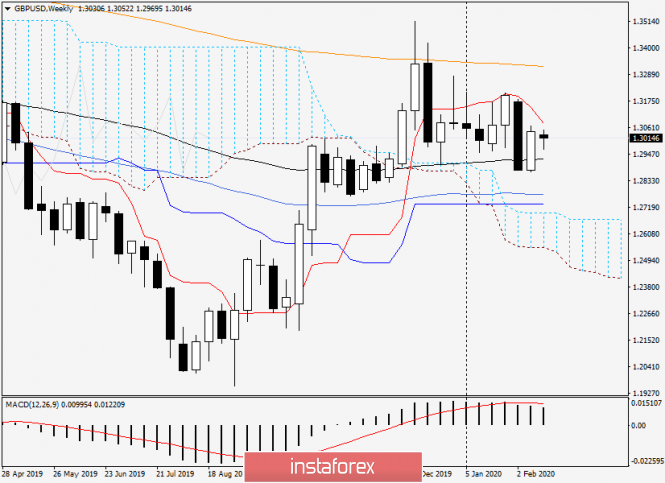 At the auction of the last five days, the pair showed growth, as a result of which a candle appeared. In the graphical analysis, these candles are called "Harami", and after their appearance, there is often a change in the direction of price movement. Often, but not always.

At the time of writing, the pound is moderately declining. However, this does not mean anything because all the main events of the current five-day period are still ahead. The situation may change several times.

The following conclusions or assumptions can be made based on the weekly timeframe. It is still too early to talk about conclusions. If the growth continues, which was recorded last week, the nearest resistance is represented by the Tenkan line of the Ichimoku indicator. This line is located at 1.3076, and in the case of the closing of trading on February 17-21 above this mark, you can count on the subsequent strengthening of the "Briton".

The downward trend scenario is signaled by a breakdown and closing below the 89 exponential moving average, which is at 1.2925. By the way, if you look at the history, this is a fairly strong technical level, which has repeatedly changed the direction of the price. An even more obvious bearish signal will be the end of trading below 1.2870, where the minimum values of the previous trades were fixed. 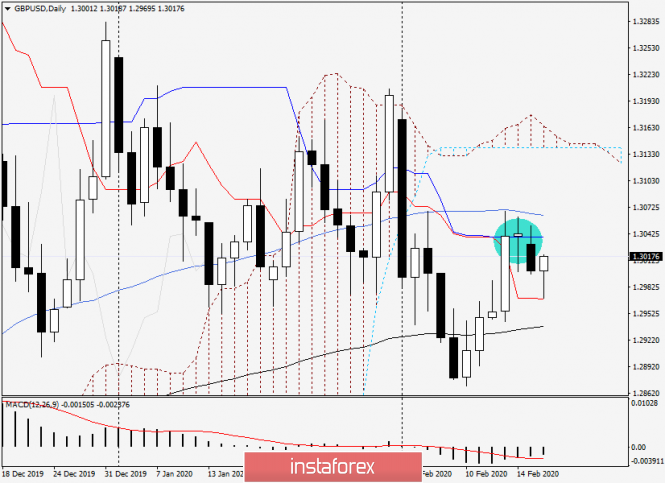 The candle, which appeared on Friday, February 14, is very similar to the "Hanged" reversal model. Actually, yesterday we began to win back this reversal, but it confuses several points.

First, judging by the weekly timeframe, further strengthening of the pair is most likely. Second, the "Hanged" candle usually appears at the very top, at the end of the upward movement. In this case, the candle formed below the highs of the previous candle.

At the moment of writing, the quote is supported by the Tenkan line, while the pound shows a strengthening. The fact is that while this review was being written, statistics from the UK on the labor market were released.

After such impressive statistics on the number of applications for unemployment benefits, the pound is likely to strengthen. This means buying the GBP/USD pair. But it is up to you to decide whether to open long positions for the pound. After the release of data on the British labor market, enough time has passed, but the pound is not in a hurry to show active strengthening. There is growth but it is quite restrained.

This situation can most likely be described as uncertain, and we should not rush it yet. Still, you should give preference to purchases.

Performed by Ivan Aleksandrov,
Analytical expert
InstaForex Group © 2007-2020
More articles by this author
Back to the list
E-mail subscription
Benefit from analysts’ recommendations right now
Top up trading account
Get a bonus from InstaForex