Analysis of EUR/USD and GBP/USD on February 18. The pound, which does not want to fall, and the euro, which falls for two 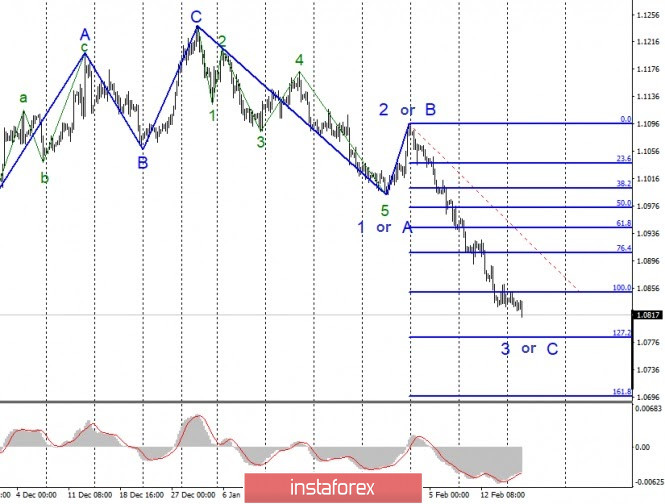 On February 17, the EUR/USD pair gained only a few base points, which did not affect the current wave markup, which assumes the construction of wave 3 or C of the downward trend. Thus, neither the internal correction wave in the composition of 3 or C nor the correction wave 4 begins their construction due to too weak demand for the euro. The size of the third wave already exceeds the size of wave 1 and the potential for further decline remains quite high. An unsuccessful attempt to break the 127.2% Fibonacci level may indicate that the markets are ready to move the instrument's quotes away from the reached lows.

There was no news background for the EUR/USD instrument on February 17. An on February 18, there were literally one or two reports that could theoretically affect the markets. The ZEW Institute's business sentiment indices for Germany and the European Union have never been indicators that cause a violent reaction in the foreign exchange market. By and large, this is a poll among managers, businessmen, and investors about what they expect from the economy in the future. If the value is high, then optimism prevails. If it is low, pessimism prevails. According to today's data, pessimism has again taken hold of businessmen and managers, as the ZEW index in Germany fell from 26.7 to 8.7, and in the European Union - from 25.6 to 10.4. Thus, the fall was quite sharp and strong. Business optimism in Germany and the European Union absolutely logically began to tend to zero. Indeed, why should it grow if the growth rate of GDP, industrial production, retail sales and other indicators in the European Union is slowing down more every month? Inflation remains weak. Monetary policy is extremely weak. Thus, just the high values of reports on business sentiment would cause some confusion. Well, the euro continued to decline today, and it doesn't even matter why the markets are selling this currency again, because of weak reports or just against the background of general sales. The main thing is that the EU currency continues to decline non-stop.

The euro/dollar pair continues to build a downward set of waves. The current wave markup has undergone some changes, so I recommend staying in sales with targets located near the estimated mark of 1.0784, which corresponds to 127.2% for Fibonacci. I do not recommend thinking about purchases yet, because the downward trend is too strong. 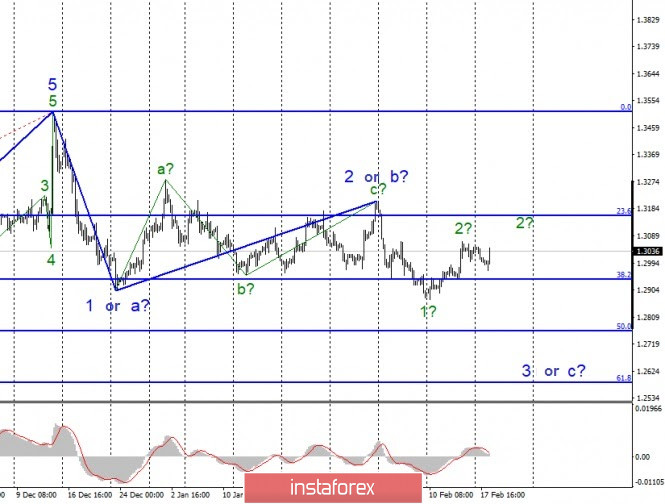 The GBP/USD pair lost about 40 basis points on February 17. However, today, it almost completely reversed yesterday's decline. Thus, the expected wave 2 in 3 or C continues its construction with the goals located on the approach to the level of 23.6% for Fibonacci. If this assumption is correct, then the second wave 3 or C will be very deep. If the current markup is correct, then the decline in quotes will resume in the near future within the wave 3 in 3 or C with targets near the 50.0% Fibonacci level.

The news background for the GBP/USD instrument was also absent on Monday. But on Tuesday, markets were closely watching data on wages and the unemployment rate in the UK. As is often the case in recent months, market expectations have not matched the actual data. The rate of wage growth in the UK fell to 2.9% in December, although a month earlier there was an increase of 3.2%. The same applies to wages excluding bonuses, which increased by 3.2%, and a month earlier – by 3.4%. The unemployment rate remained the same – 3.8% in December, and the number of applications for unemployment benefits was significantly lower than market expectations – 5.5K against 22.6K. Thus, it was the latest report that probably caused an increase in demand for the British in the first half of Tuesday, which may lead to a complication of the expected wave 2 in 3 or C.

The pound/dollar instrument continues to build a downward wave 3 or C. Thus, I recommend selling the instrument on the MACD signal "down" with targets located near the mark of 1.2767, which corresponds to 50.0% for Fibonacci. This signal is already available and has not yet been canceled, although the pound is trading higher today.