GBP/USD: plan for the US session on February 18. The bulls are happy with any good news on the UK economy. A return to the resistance of 1.3050 leaves buyers with a chance

In the morning review, I paid attention to the importance of the report on the state of the UK labor market, which managed to support the British pound, returning the GBP/USD pair to an upward trend, and to the level of 1.2967, from which it was possible to open long positions. The main task of the bulls for the second half of the day will be to break through and consolidate above the resistance of 1.3052, which will open a direct road to the area of the highs of 1.3093 and 1.3133, where I recommend fixing the profits. However, in case of further problems for buyers at this level, a more optimal scenario for opening long positions will be a downward correction to the support area of 1.3010, provided that a false breakdown is formed there or a purchase for a rebound after the test of the minimum of 1.2967, where the lower border of the ascending channel now passes.

Sellers are not in a hurry to return to the market and small pullbacks down from the level of 1.3050 are only profit-taking for long positions. In the second half of the day, the bears need to achieve the formation of a false breakdown in the resistance area of 1.3052, and if the sellers are able to implement this scenario, we can expect the pair to return to the support area of 1.3010, which is now the middle of the side channel formed this week. A break in this range will quickly return the pound to a minimum of 1.2967, where I recommend taking the profits. If the bears do not cope with the task of holding the resistance of 1.3052 in the second half of the day, then it is best to postpone short positions until the level of 1.3093 is updated or sell GBP/USD immediately for a rebound from the resistance of 1.3133.

Trading is conducted in the area of 30 and 50 daily averages, which indicates more of a sideways nature of the market.

If the pair declines, the lower border of the indicator around 1.2967 will provide support. 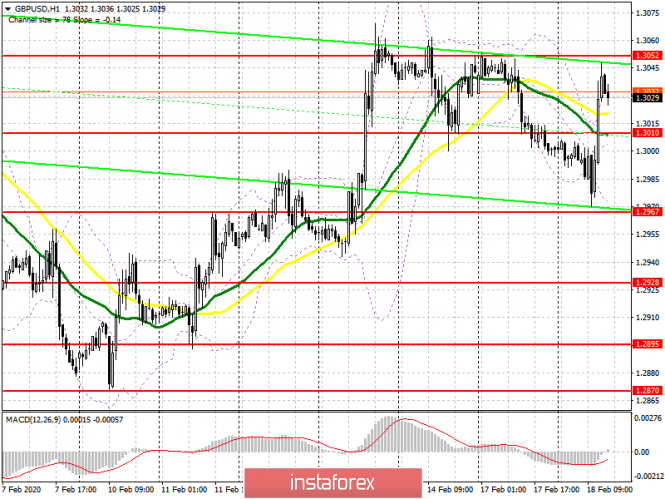