Analysis of EUR/USD and GBP/USD on February 21. Weak inflation in the European Union ruined the effect of increased business activity 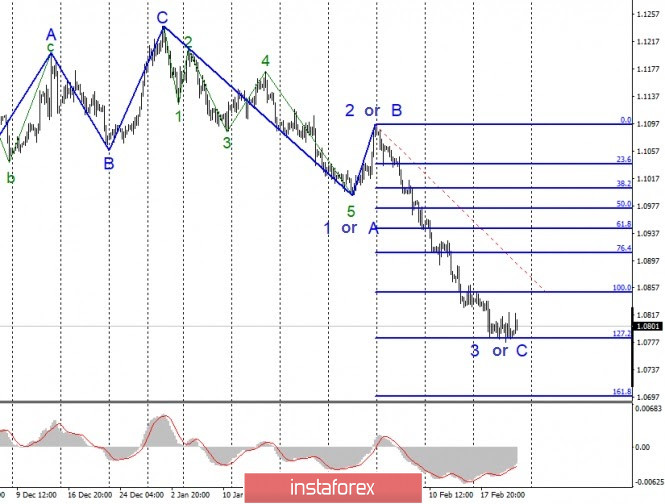 On February 20, the EUR/USD pair lost 20 basis points and made an unsuccessful attempt to break the 127.2% Fibonacci level. Thus, it is still unclear whether the construction of the proposed wave 3 or C has been completed, or whether it will become even more complicated and continue its construction. Until a successful attempt to break the mark of 1.0784 is made, the working option will be to build a corrective ascending wave or even a set of waves.

The news background for the EUR/USD instrument was again absent on February 20. This is noticeable in the amplitude over the past day. The instrument's quotes are trading just above the 127.2% Fibonacci level and cannot determine whether to continue moving. Already today, on February 21, the chances of increased activity were much greater, however, several economic reports from the European Union did not attract the attention of the market. It should be noted that all the reports on Friday were somewhere in-between. Nevertheless, the markets could rejoice that business activity in Germany and the European Union in the services and production sectors showed a positive trend. Although it is possible to evaluate these indices in different ways. For example, business activity in the manufacturing sectors of Germany and the EU increased, however, it still remained below the key mark of 50. Thus, the decline in these areas persists despite the improvement in values. But the markets could not help but pay attention to the report on inflation in the European Union for January. The value of inflation coincided with expectations: +1.4% y/y and -1.0% m/m. And it is quite possible that this report did not allow the demand for the euro to increase today. After all, the value of +1.4% y/y is still a fairly low value, and -1.0% y/y is a reduction in inflation, which can not be regarded by the markets as a positive result. There are still indices of business activity in the US services and manufacturing sector, which are also unlikely to cause strong changes in the instrument's amplitude. We need stronger reports to make a successful attempt to break the 127.2% Fibonacci level.

The euro/dollar pair continues to build a downward set of waves. Based on the current wave markup, I recommend waiting for a successful attempt to break the 127.2% Fibonacci level for new sales with targets located near the mark of 1.0699, which corresponds to 161.8% Fibonacci. 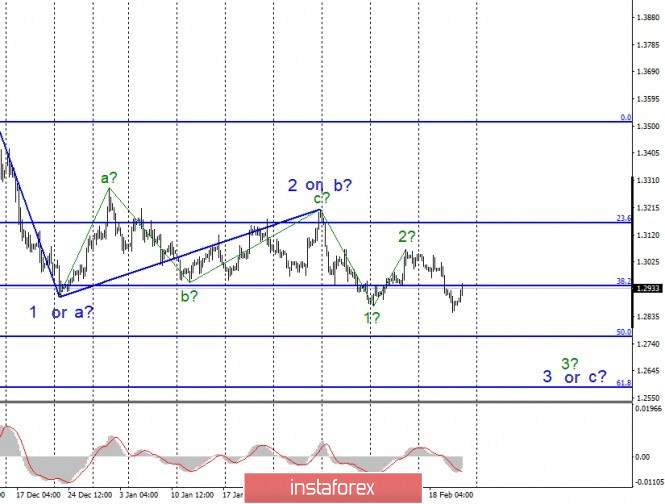 The GBP/USD pair lost about 40 basis points on February 20 and thus continued to build a downward section of the trend within the expected wave 3 in 3 or C. If this is true, the increase in the instrument's quotes today can be regarded as building an internal corrective wave 3 in 3 or C. Thus, after a small deviation of the quotes from the reached lows, I expect a resumption of the decline in the direction of the previously defined goals.

The news background for the GBP/USD instrument on Thursday was only in the report on retail sales in the UK, and it should be said that this report brought a small bit of optimism to the markets. Retail sales in January were slightly higher than what markets expected. However, this report clearly did not help the pound, as demand for it remained low throughout the past day and did not change in a big way. Reports on business activity in the UK have already been released today. In the services sector, activity fell to 53.3 points, while in the manufacturing sector - it rose to 51.9. Thus, there are chances for the recovery of the industrial sector, which in recent months has been actively reduced in volume. A strong index of business activity in manufacturing, which finally left the area of decline below the mark of 50, certainly boosted demand for the Briton on Friday.

The pound/dollar instrument continues to build a downward wave 3 or C. Thus, I recommend selling the instrument with targets located near the mark of 1.2767, which corresponds to 50.0% of Fibonacci on the new MACD signal "down", which will signal completion building corrective rising wave.