Analysis of EUR/USD and GBP/USD on February 26. Markets are waiting for data on US GDP. The euro and the pound are consolidating 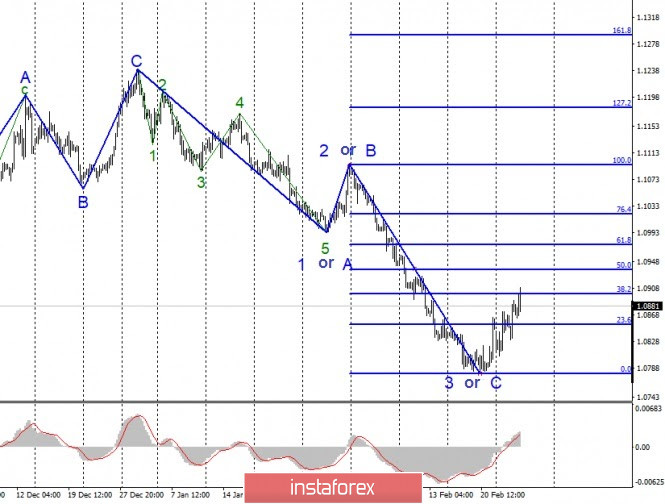 On February 25, the EUR/USD pair gained about 25 basis points and continued to move away from the previously reached lows in the framework of the expected wave 4 or a new upward trend section. At the moment, the correction is 38.2% of the size of wave 3 or C. Thus, an unsuccessful attempt to break this mark may cause the instrument to resume its decline within the expected wave 5 with targets located much lower than the figure 8.

The news background for the EUR/USD instrument on February 25 was very poor. There is still no important news, all reports are absolutely uninteresting. Yesterday, Germany's GDP for the fourth quarter of 2020 was released – the first report at the beginning of the week that was worth paying attention to. However, its actual value coincided with the expectations of the markets, so any reaction has not followed. All the more so because now the wave markup is uncompromising – either the correction wave 4 or the correction set of waves. Thus, in almost any case, the instrument should have been raised even without any news background.

Today, on February 26, it is better not to talk about the news background for the euro/Dollar instrument at all. The most important report of the day is "new home sales" in the US. It is unlikely that the markets will pay attention to this data. Most likely, the construction of the correction wave will continue. Only tomorrow, the news may affect the movement of the instrument and its amplitude, as on February 27, data on orders for long-term goods in America will be released, as well as data on GDP for the fourth quarter. The tool for building wave 5 needs strong data from America. Since there will be little news on Friday, tomorrow will be somewhat decisive for the euro and the dollar.

The euro/dollar pair have presumably completed the construction of a descending set of waves. Based on the current wave markup, an unsuccessful attempt to break through the 38.2% or 50.0% Fibonacci levels may lead to the beginning of wave 5 construction. Thus, I recommend waiting for such an attempt and the MACD "down" signal and then selling the instrument again with targets around 8 points or lower. 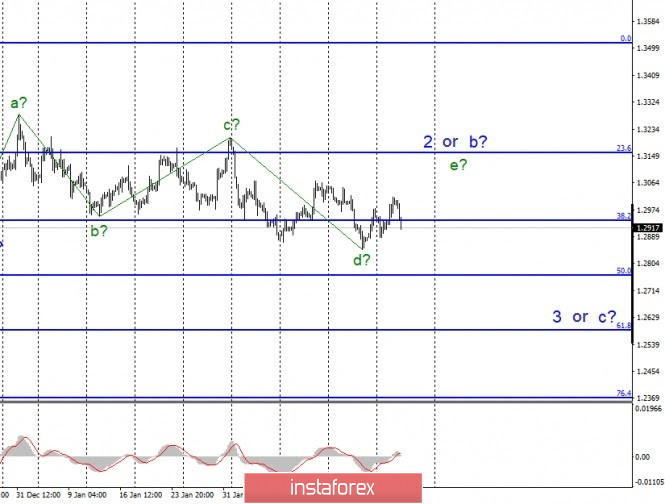 The GBP/USD pair gained about 80 basis points on February 25, which led to additions to the current wave markup. Now the assumed wave 2 or b has taken the form of an oblique triangle with 5 waves inside it. If this assumption is correct, then after the last wave is completed, the price decline will resume within the wave 3 or C with targets located around 25 points and below.

The news background for the GBP/USD instrument was again absent on Tuesday. No economic reports, no more or less important news from Britain. Thus, the pound has to build intricate wave structures in order to somehow play out such a news background. Markets are still waiting for the start of negotiations between Britain-EU and Britain-US to assess the likelihood of trade deals in 2020. It is on these deals that the future of the UK, its economy and the prospects for the British currency depend. So far, nothing new can be said even about Britain's economic prospects, since all statistics remain contradictory and certainly do not indicate a recovery in the economy. In general, the markets can only wait. Wait for economic reports, wait for news about the negotiations.

The pound/dollar tool has complicated the current wave markup, which has now become much more extended. Thus, I recommend waiting for a new "down" signal from the MACD near the 23.6% Fibonacci level and selling the instrument with targets located near the mark of 1.2767, which corresponds to 50.0% Fibonacci.