Analysis of EUR/USD and GBP/USD for April 1. Important day for the American currency. 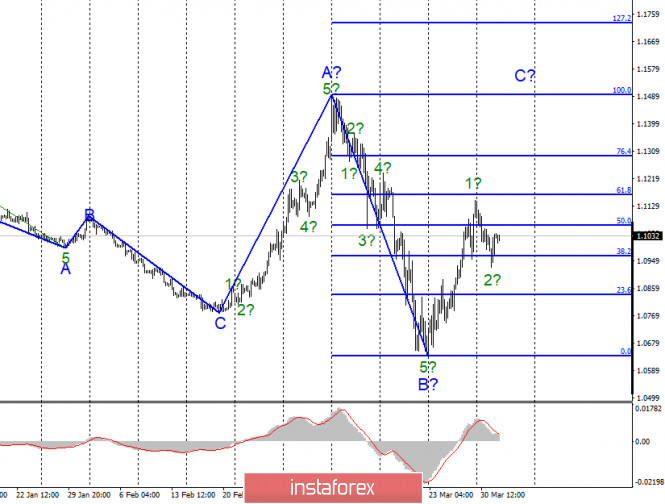 On March 31, the EUR / USD pair lost only 10 basis points, although it fell 120 points during the day, to the level of 38.2% Fibonacci. However, an increase began closer to the close of trading on the day, which coincided with an unsuccessful attempt to break through the 38.2% Fibonacci level. Thus, increasing the quotes of the pair can resume in the new upward wave perhaps 3 to C. If this is true, then the maximum of wave 1 in C can be overcome today.

The news background for the EUR / USD instrument on March 31 was quite weak. Mainly, the whole background came down again to information about the epidemic of the COVID-2019 virus, which cannot be controlled so far. It is even better to say that the vast majority of countries in the world are now in quarantine and are waiting for the pandemic situation to improve. Therefore, there is practically no news from the European Union. In America, top officials speak from time to time, but their speeches are aimed at the same coronavirus and the fight against it. However, today, April 1, markets can finally appreciate the information that will come during the day even better, in the afternoon. In the morning, only business activity indices will come out in the manufacturing sectors of the Eurozone countries, which have long been known to the markets, since preliminary values came out a week ago, and unemployment in the EU in February. But after lunch, several important statistics will come out in America, which includes an ADP report on the level of employment in the private sector in March and business activity indices in the US services sector. The first report is akin to unemployment or Nonfarm Payrolls, that is, showing how much the US labor market has increased or decreased. And judging by the latest reports on applications for unemployment benefits, you should not expect anything good from the ADP report either. Markets do not wait. The forecast is a decrease of 154 thousand. ISM business activity in the manufacturing sector is expected to be reduced by markets to 45.0, and Markit - to 49.2. Thus, both indices will be below 50.0, which will indicate a decline in this industry. However, during the global pandemic, it is not surprising that the manufacturing sector is experiencing problems.

The euro-dollar pair presumably continues to build the rising wave C, which can turn out to be very long. The internal wave structure of this wave can take a 5-wave form. I recommend buying the instrument again in order to build a new impulse wave inside C after receiving the MACD signal "up" with targets located near the levels of 1.1165 and 1.1295, which corresponds to 61.8% and 76.4% Fibonacci. 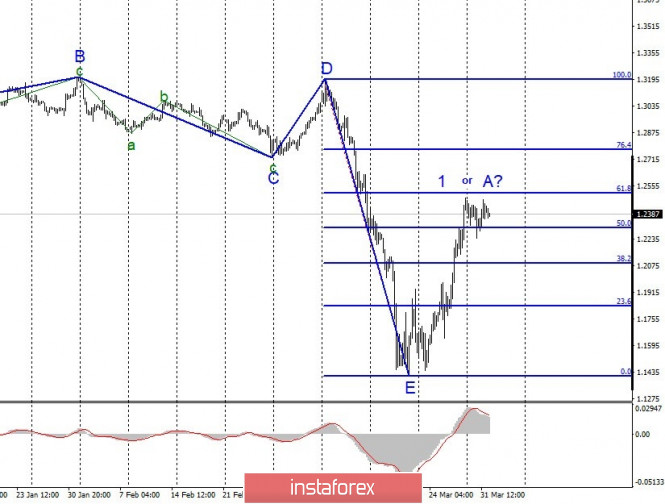 On March 31, the GBP / USD pair practically did not change in price for the second day in a row, having lost only 10 basis points. However, as in the case of the EUR / USD instrument, the quotes went down by almost 180 points during the day. Nevertheless, an unsuccessful attempt to break through the 50.0% Fibonacci level did not allow a further decline.At the same time, the expected wave 1 or A can be completed, so before a successful attempt to break the 61.8% Fibonacci level, I am considering the option of building a corrective wave 2 or B.

The economic news for the GBP / USD instrument on Tuesday was weak. From economic reports, I can only identify GDP in the UK, which did not surprise the markets, amounting to 1.1% y / y. Today, in addition to important news in the US, Britain will see an index of business activity in the manufacturing sector for March, which is expected to decline to 47.0, that is, as well as the others, will go below 50.0. However, since the markets are now reacting rather weakly to the economic background, the British report may generally be ignored. And, most likely, it will be so. The news about the epidemic speaks of 860 thousand patients worldwide, about 190 thousand patients in America and 25 thousand infected in the UK. The incidence rate is not declining, so markets continue to be in a state of shock.

The pound / dollar instrument continues to build an upward wave, which, presumably, is part of the new upward trend section. Thus, the British will be able to make purchases after the completion of the proposed correctional wave or in the case of a successful attempt to break through the 61.8% Fibonacci level. The breakdown of the 50.0% Fibonacci level will indicate the readiness of markets to build a correctional wave with targets near the level of 1.2088.