EUR/USD. April 1. Bear traders are preparing the pair to fall, but they need to close at 1.0964 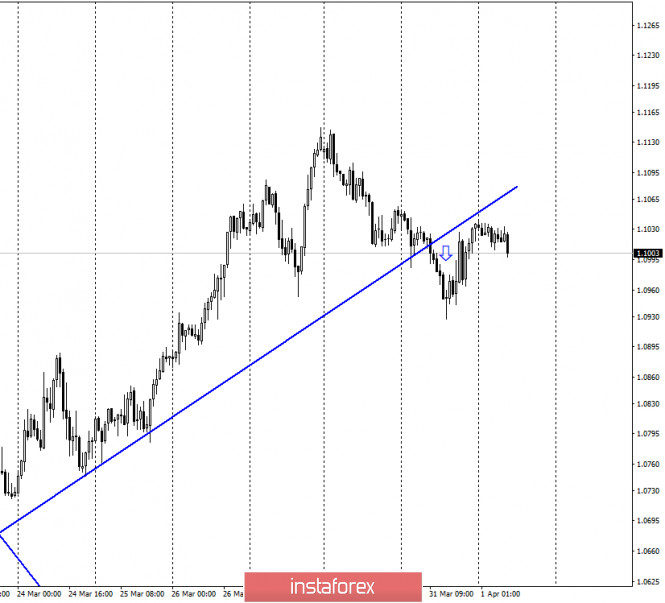 Hello, traders! On March 31, the euro/dollar pair performed a consolidation under the upward trend line, thus changing the "bullish" mood of traders to "bearish". Traders can now expect to continue falling quotes, but it should be remembered that the shock state of the market in principle remains. The activity of both large and small market players remains high. Thus, it is possible to resume the growth process. Today, for example, in America, an important report on the state of the labor market will be released, which may force traders to sell the US currency again. And on the 4-hour chart, there is a rebound from the correction level, which also allows you to count on the resumption of growth. Thus, in order to be more confident about the "bearish" mood of traders, we need confirmation signals for the current one. 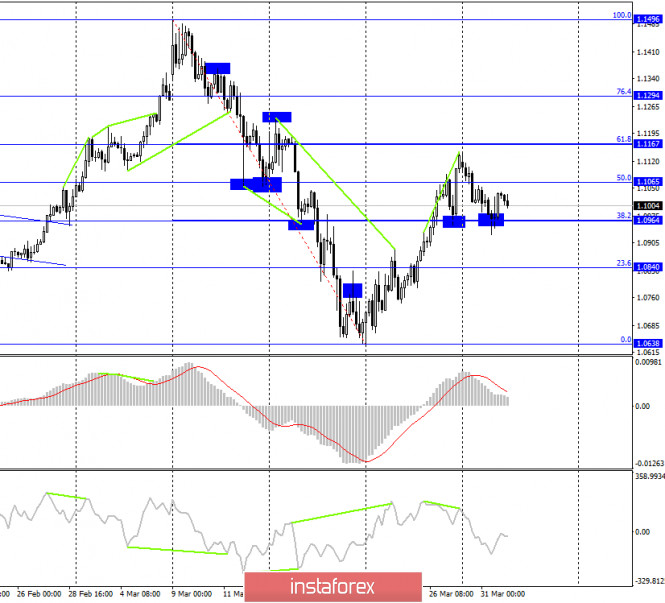 On the weekly chart, the pair has a high chance of continuing the growth process, since the breakdown of the lower border of the "narrowing triangle" turned out to be false. Thus, it can be considered a rebound, not a breakdown. In the future, the euro/dollar pair has the ability to perform growth to the level of 1.1600, that is, to the upper line of the triangle.

On March 31, the unemployment rate in Germany was 5%, the number of unemployed increased by only one thousand, and inflation in the European Union fell to 0.7% y/y in the preliminary estimate. All this news did not have much impact on traders.

News calendar for the United States and the European Union:

Germany - the index of business activity in the manufacturing sector (09:55 GMT).

EU - index of business activity in the manufacturing sector (10:00 GMT).

On April 1, there are again quite a lot of important economic reports. Traders should pay special attention to the report from ADP, which will show how much the number of people employed in the US private sector has changed. A strong contraction is expected, which may lead to a drop in demand for the dollar on Wednesday. 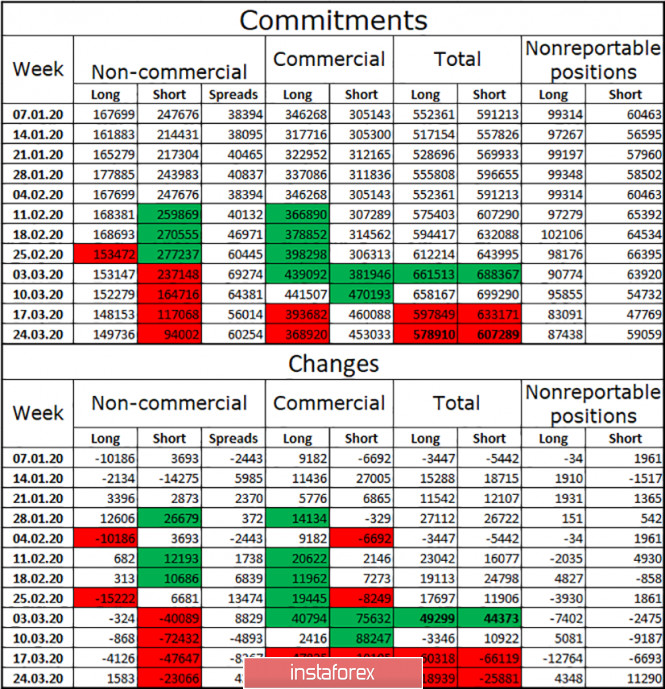 According to the latest COT report, major market players continue to get rid of both buy and sell contracts. The activity of traders on the EUR/USD pair, therefore, falls, as you can see by making the appropriate calculations. Speculators mostly got rid of short contracts. Companies that hedge their risks using currency operations also closed short contracts, but also long contracts. The total number of active contracts remains in favor of short. What exactly do hedgers have on their hands now from the total volume of contracts? The upward prospects for the euro currency remain. However, nothing prevents the euro/dollar pair from performing a correction and then resuming the growth process.

Forecast for EUR/USD and recommendations for traders:

Since the pair closed below the trend line on the hourly chart, I now recommend selling. But you should wait for confirmation, that is, closing under the Fibo level of 38.2% (1.0964). Without it, you can't expect a strong drop in quotes. The goal for short positions is 1.0840. As a signal to buy, I recommend considering a rebound from the level of 1.0964. In this case, the goal is 1.1065.