If you look at the macroeconomic calendar, then everything simply yells that the dollar should grow steadily. Indeed, this was observed for some time. Moreover, the dollar was growing quite vigorously. However, at the end of the day, the dollar had to retreat and return to the starting position. It was worth all hoping that the growth rate of cases of coronavirus infection in the United States had stabilized, and now a recession would begin, as another sad anti-record was set. In just a day, 26.4 thousand new cases of coronavirus infection were recorded in the United States. At the same time, the United States is ahead of China in terms of the number of fatalities. Horrified, the dollar, as if by magic, literally teleported to the values with which it began its journey yesterday. But the most frightening thing is the fact that if there is such a situation with the dynamics of the spread of the coronavirus, the economic consequences will eventually be much worse than you can imagine. And this is despite the fact that they are already beginning to record a significant deterioration in the macroeconomic situation. This means that it will only get worse. 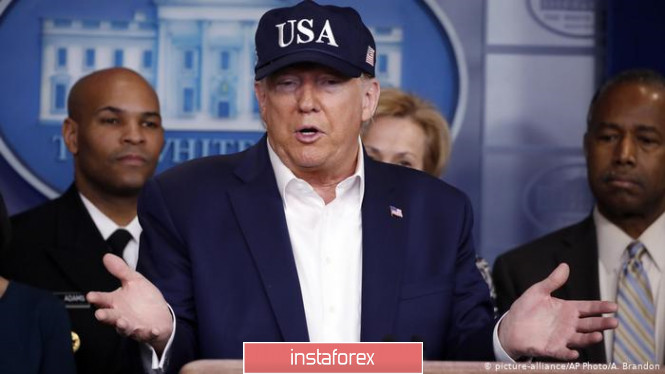 At the same time, as briefly noted earlier, the statistical data in the Old World was not positive. For example, UK GDP growth slowed from 1.3% to 1.1%. However, the previous data were revised for the better, and in the third quarter, the economy grew not by 1.2%, but by 1.3%. But the fact of economic slowdown does not disappear from this. And it turns out that the pace of deceleration is even somewhat higher. This means that coronavirus can deliver an even greater economic blow, since this very economy does not feel the best way. 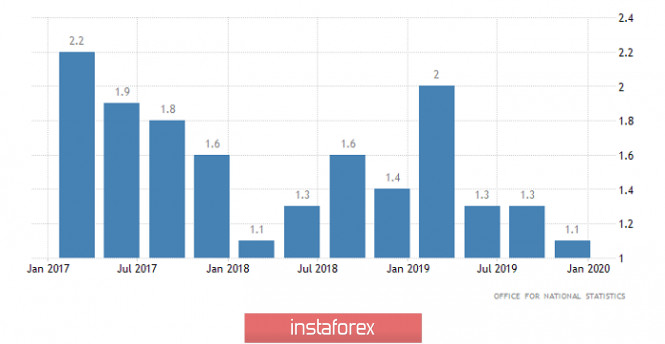 Inflation in Europe is simply declining at a surprising rate, from 1.2% to immediately 0.7%. Thus, deflation is not a figment of the imagination of a sick mind. It is getting more and more real. Consequently, the European Central Bank has a serious reason to think about the possibility of lowering the refinancing rate. However, it should be noted that there were those who feared that inflation would decline even more. But still, this data is quite difficult to call optimistic. At the same time, inflation fell from 1.4% to 0.6% in France, while its deceleration was forecast to be 0.9%. But the situation was leveled by Italy, which simply miraculously avoided the onset of deflation, and inflation fell from 0.3% not to -0.3%, but to 0.1%. And the decline in producer prices in Italy accelerated from -2.3% to -2.6%, with a forecast of -2.7%. Meanwhile, Spain, as it should be, reported a slowdown in economic growth from 1.9% to 1.8%. That is, there is a continuous slowdown in the economy in the Old World. And this is the data at the end of last year when there was no coronavirus yet. Probably the only positive news from Europe can be considered is the data on the unemployment rate in Germany, since it has remained unchanged. Although it was supposed to grow from 5.0% to 5.2%. And this contrasts strongly with the data on the labor market in the United States. After all, the data on applications for benefits were simply appalling last week. So the European labor market is still holding up. Apparently, government assistance in Europe is more effective and targeted, which allows small entrepreneurs to feel a little more confident. Although this is data for February, so there are still possible options. 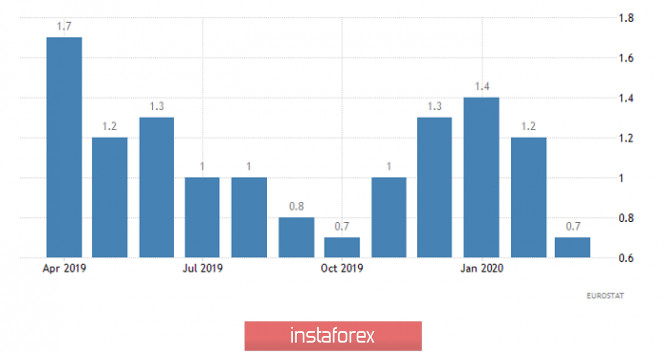 The funniest thing is that American macroeconomic statistics was purely positive unlike the Old World. S & P / CaseShiller data showed an acceleration in the growth rate of housing prices from 2.8% to 3.1%. And yes, of course you can find fault and say that they expected acceleration to 3.2%, and even with 2.9%. That is, the pace is not the same, and the previous results were reviewed for the worse. But the fact of acceleration from this does not disappear. And this is very different from Europe, where the dynamics are deteriorating in all respects. At best, indicators remain unchanged. 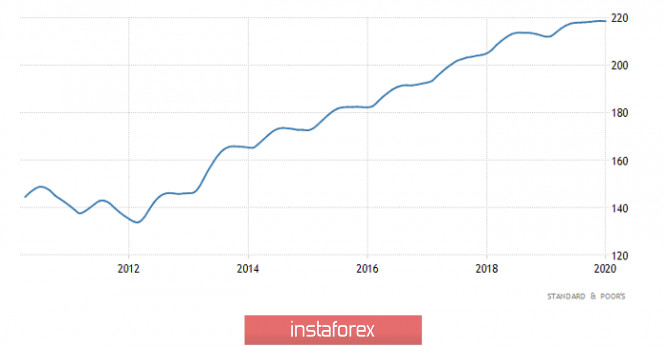 Apparently, the market has already developed the habit of starting the day with a decrease in the single European currency and the pound. Well, then, according to the situation, but rather following the tonality of the headlines in the mass media and disinformation. At the same time, data on indexes of business activity in the service sector was published today, which will have no effect. Everyone was already horrified by their record collapse when preliminary estimates were published. And even if the final data turns out to be a little better, the essence of this will not change. But in Germany, retail sales growth accelerated from 2.1% to 6.4%. It is noteworthy that this is data for February. Apparently, the Germans stormed the shops at the very end of February in an effort to purchase everything they needed to stay at home during the coronavirus epidemic. This hit Germany very hard. However, the blow itself fell in mid-March. But perhaps, the main European news today is the unemployment rate in the euro area, which should remain unchanged. The truth is that it is not worth making hasty conclusions yet, since the data for February, and what happened in March with the labor market, we will see a little later. 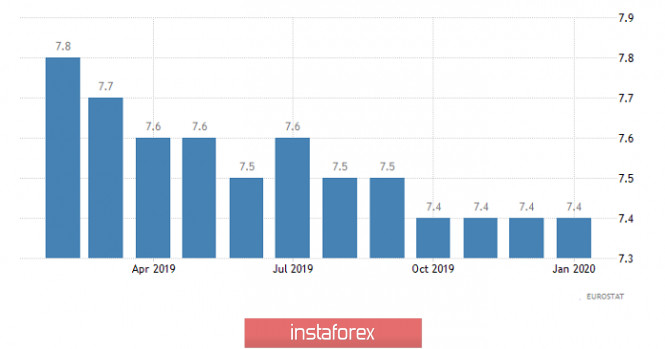 However, all this against the backdrop of ADP employment data, which should show a decrease of 170 thousand. The United States has not seen such a massive decline in employment since the 2008-2009 crisis. However, there was not such a large-scale flow of the number of initial applications for unemployment benefits, so the situation is much worse. And such poor labor market data clearly will not add optimism to the dollar. Apparently, the United States will not be able to avoid a disaster in the labor market, which will drag along with it the entire economy. Of course, construction costs should increase by another 0.6%, but who cares when such things happen to the labor market. After all, it may soon become that there will be no one to buy this very housing, simply because of a lack of money. 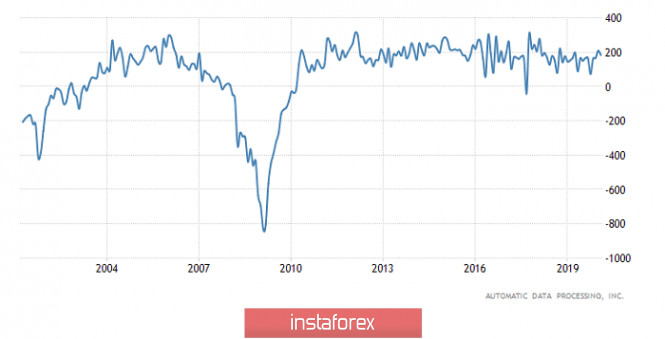 So today, we can see more than just a repetition of yesterday, when the dollar returned to its starting position. Horrible data on the labor market should contribute to the growth of the single European currency to the level of 1.1100, locally even higher. 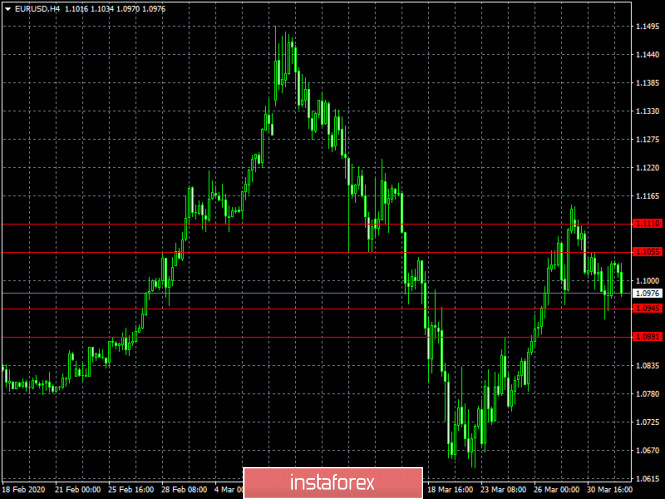 We have exactly the same scenario that will develop in the pound. So the level of 1.2525 does not seem so surprising. 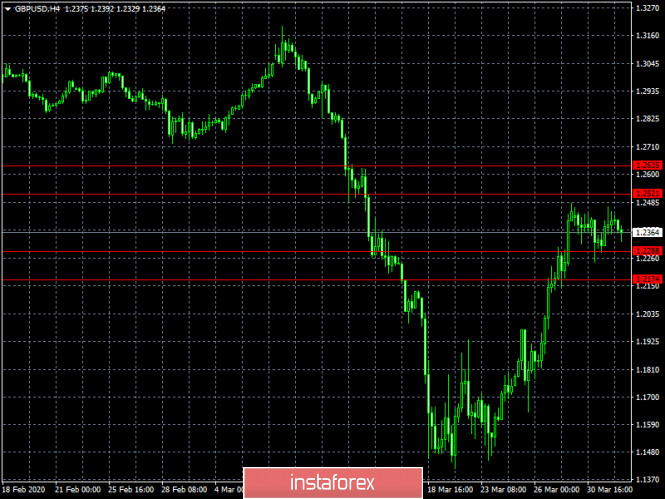