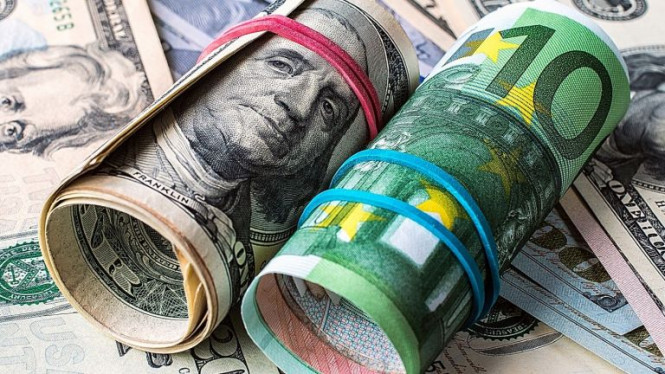 Over the current week, the euro remains in the shadow of its rival, the greenback. Markets focused on assessing the protective properties of the dollar, losing sight of the euro. According to analysts, the euro is going through difficult times, but the hope for its rise still remains.

The decisive growth of the dollar, which seems to have gained a second wind, complicates the situation. This is despite the Fed's aggressive actions aimed at total easing of monetary policy, as well as impressive financial support from the US economy and US citizens. Experts record an increase in demand for the greenback, used as an asset-refuge, and a weakening interest in the euro. Nevertheless, analysts believe that in the long run this situation can be reversed in favor of the euro.

At the beginning of this week, the euro sank about 100 points against the dollar. The reason for this was the extremely disappointing economic data on the business sentiment of European companies and Eurozone consumers. Last month, both of these indicators collapsed with a deafening crash. The catalyst for such a collapse was the outbreak of the COVID-19 pandemic around the planet. According to the information provided by the European Commission, the eurozone economic sentiment index fell to 94.5 points, which is much lower than the February figure of 103.4 points.

Last month, Italy's economy suffered the most. Here, the collapse of the indicator was recorded from the previous 101.3 points to 83.7 points. Spain was much better in this regard, where the index fell from 102.7 points to 99.3 points, although the country is also in a critical situation for coronavirus. In Germany, this indicator decreased by almost 10 points, to 92.0. According to experts, the growth in consumer prices in Germany remained at almost zero, which brings the largest eurozone economy closer to a recession.

According to the German Federal Bureau of Statistics, in the past month, the annual inflation rate in the country slowed down to 1.3% compared with 1.7% recorded in February. According to economists, this is an extremely low indicator, noted since November 2019. The reasons for this, experts believe, are not only a sharp collapse in energy prices and the coverage of the territory with the COVID-19 pandemic but also stagnation of salaries due to the deterioration in German GDP growth.

The statistics on other large eurozone economies like France did not please the markets either. It turned out to be very weak, not to mention the rising inflation in the country. Experts were disappointed by the minimal increase in consumer spending in France, where, in February 2020, this was decreased by 0.1% compared with March, although the forecast assumed an increase of 0.7%. The failure of this indicator worries analysts expecting a larger drop in consumer spending as the COVID-19 pandemic expands.

The shocking macro statistical data on the eurozone economy forced a number of experts to revise previous forecasts. Currency strategists at The Goldman Sachs have changed their calculations regarding inflation in the eurozone. The bank believes that in March 2020, the consumer price index will increase by only 0.81% compared to the same period in 2019. Many economists are confident that this year, Eurozone GDP will narrow by 3.6%. The cause of this decline is still the COVID-19 pandemic, the consequences of which will be monstrous.

However, not only the European economy will have to deal with the consequences of COVID-19. Economists said that the US economy, despite its resilience, will not be able to avoid the negative impact of the pandemic. They expect a noticeable decline in the US GDP, which nevertheless will suffer less from the effects of coronavirus and will decrease by only 2.9%.

Despite prioritizing of the dollar among investors, the euro leaves no hope of revival. From time to time, the euro tries to gain a foothold, although these attempts prove futile. On the last day of March, the bears in the EUR / USD pair set the tone, which managed to reach the 1.0950 level. A serious battle broke out in this range, in which sellers won. On Wednesday, April 1, the pair runs near 1.0977–1.0980, periodically going beyond this range. In the event of a further drop in demand for the euro, analysts recommend to exit long positions and wait for a return to the lows of 1.0870 and 1.0750.

Many experts find it difficult to predict the further dynamics of the euro due to an extremely tense situation at present. The currency strategies of TD Securities, which announced the depreciation of the euro in the second quarter of 2020, decided on this. Experts are sure that random fluctuations in risk sentiment will support the euro, however, other factors are not in favor of this. Currently, the euro behaves in cycles, and not as a reliable asset-refuge, according to TD Securities. The bank expects the EUR / USD pair to fall to 1.0500 by the end of the second quarter and a rebound to 1.1200 by the end of 2020.

According to leading economists, the current risks for the global economy and the eurozone economy remain very high, and uncertainty is increasing. This reduces the euro's chances of recovery and increases the dollar's ability as a safe haven. Experts believe that the growth of the greenback will continue until the peak of the outbreak of coronavirus has been passed.

Despite a number of unfavorable circumstances, the euro is ready to accept the challenge both from the dollar and the consequences of COVID-19 and switch to a new price orbit in the near future. At the moment, it is struggling to maintain its position, giving, albeit weak, hope to investors. Some analysts believe that the current failure of the euro is a step for the next start of a financial asset, which in the long run will be able to reach relatively high rates.