GBP/USD: plan for the US session on April 3. Bears are counting on a major flight of the pound down. The support of 1.2315 was passed

Bears managed to gain a foothold below the support of 1.2315 in the first half of the day after very poor data on activity in the UK services sector. This is clearly visible on the 5-minute chart. However, the continuation of the downward trend in the pound will depend on data on the state of the US labor market. In the second half of the day, the bulls urgently need to return a pair back to the level of 1.2315, since only in this scenario will it be possible to maintain the advantage. If the decline continues in GBP / USD, it is best to return to long positions only after the support test of 1.2150 or to rebound from the larger minimum of 1.1985, in the expectation of correction of 60-70 within the day. A breakout and consolidation above 1.2315 will push purchases to the maximum area of 1.2473, where I recommend fixing the profits. 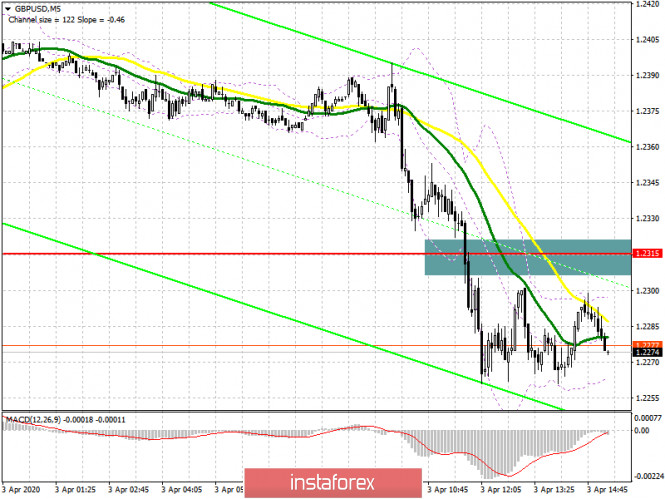 The bears coped with the weekly task and broke below the support of 1.2315 from the 5th time. Sellers of the pound in the second half of the day need to achieve the formation of a false breakout in the resistance area of 1.2315, the pair's return to which may occur after the release of data on the state of the US labor market. Only this scenario will be an additional signal to open new short positions in the hope of continuing the decline of the pound in the short term to the area of lows 1.2150 and 1.1985, where I recommend fixing the profits. If the bears prefer to retreat again, already from the resistance of 1.2315, I recommend returning to short positions only for a rebound from the weekly maximum in the area of 1.2473. 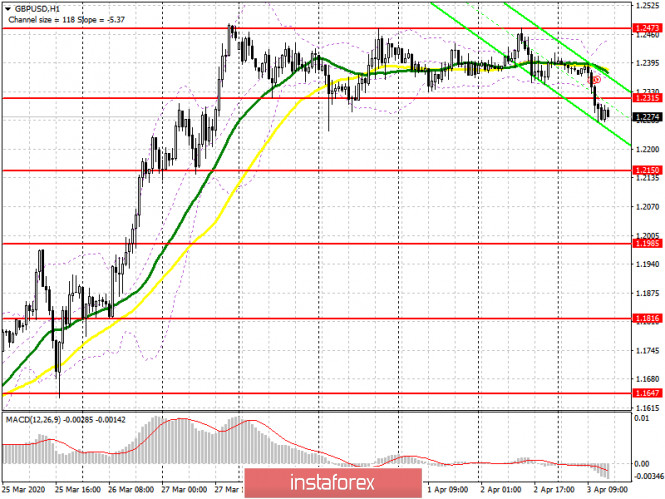 Trading is conducted below the 30 and 50 daily averages, which indicates the predominance of sellers in the market of the British pound.

Note: The period and prices of moving averages are considered by the author on the hourly chart H1 and differ from the general definition of the classic daily moving averages on the daily chart D1.

If the pair grows in the second half of the day, the upper limit of the indicator around 1.2470 will act as a resistance.