EUR/USD: plan for the European session on April 6. Weak US labor market data did not greatly disappoint traders. Bulls count on the return of resistance 1.0833

Friday's data on a sharp increase in unemployment in the US to 4.4% and an increase in the number of people employed in the non-agricultural sector by more than 700,000 did not put much pressure on the US dollar, as it did not lead to its collapse against a number of world currencies. Traders calmly reacted to the disappointing statistics, adequately perceiving what is happening in the world. However, a slowdown in the pair's decline in the short term may play into the hands of euro buyers. The initial task of the bulls today in the first half of the day will be to return to the resistance of 1.0833, just above which the moving averages pass. Consolidating on this range will make it possible for you to think about continuing the upward correction amid profit taking by bears, with a likely test of the high of 1.0894 and an update of the larger resistance of 1.0955, where I recommend consolidating the profit. If the pressure on EUR/USD persists further after weak German indicators and investor confidence, it is best to return to long positions only after updating the low of 1.0776, provided that a false breakout is formed, or immediately on a rebound from the larger support of 1.0718.

To open short positions on EUR USD you need:

Given the lack of demand for the US dollar as a safe haven asset at the end of last week after the terrible reports on the US labor market, we can conclude that the bears will take a pause at the beginning of the week and will not actively dispose of risky assets like the euro. It is necessary for sellers of EUR/USD to protect the 1.0833 range, where the formation of a false breakout will be a signal to open short positions in expectation of further decline of the pair to the lower boundary of the descending channel and to update the weekly lows with a break of the support 1.0776 and test a larger area 1.0718 where I recommend to take profit. In case the pair grows above the resistance of 1.0833 in the first half of the day, even against the background of weak data on investor confidence in the eurozone, it is best to return to sales only after the test of a large resistance of 1.0894, or short EUR/USD immediately to rebound from the high of 1.0955. 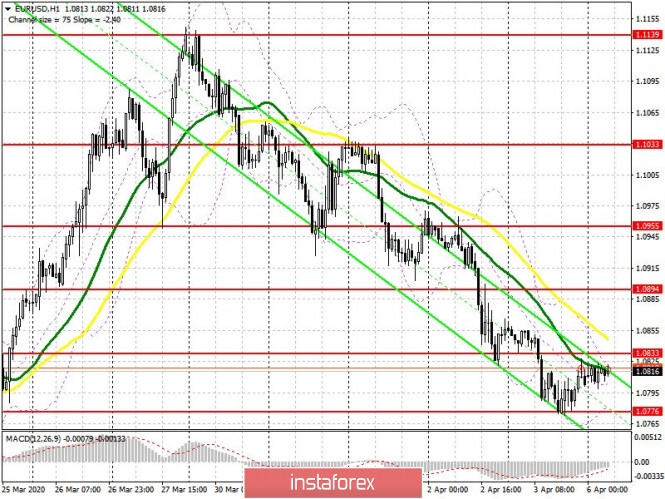 Trading is below 30 and 50 moving averages, however, the first signs of a downward trend slowdown have already appeared. Be careful with short positions at current lows.

A break of the lower boundary of the indicator in the region of 1.0776 will raise pressure on the euro. A break of the upper border at 1.0833 may lead to a larger upward correction of the pair.