The market behaved last week, to put it mildly, not quite adequately. Especially at the very end, when it became clear that the US labor market is beginning to be a real disaster. And on such a scale that there is no doubt that we are in for a severe economic crisis. And this catastrophe is happening amid further deterioration of the epidemiological situation in the United States. From what, the United States itself, begins to behave somewhat strangely. More precisely, it is normal, from the usual historical point of view. The story of a huge shipment of medical protection products that was on its way to Germany, but was stopped on the way and forcibly sent to the United States, is extremely revealing. As they say, everyone saves himself. And this story perfectly explains why the dollar is strengthening, despite the situation with the labor market, and a real epidemiological disaster. 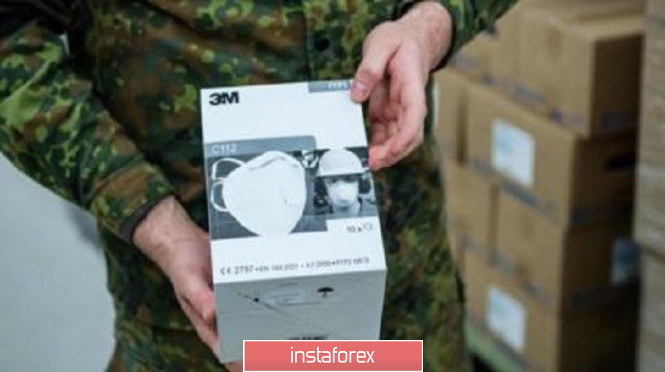 However, we must admit that the situation in Europe is not much better. What about the coronavirus epidemic, since Europe itself is the real epicenter of the spread of this terrible virus. What about the economy? Thus, the final data on the index of business activity in the service sector showed a decrease from 52.6 to 26.4. Although the preliminary estimate showed a fall to 28.4. The composite business activity index dropped from 51.6 to 29.7 instead of 31.4. However, retail sales were somewhat pleased, the growth rate of which accelerated from 2.2% to 3.0%. However, this is data for February, and now we can say that the world will never be the same again. And for Europe and North America, where this claim is extremely popular, the world began to change in March. 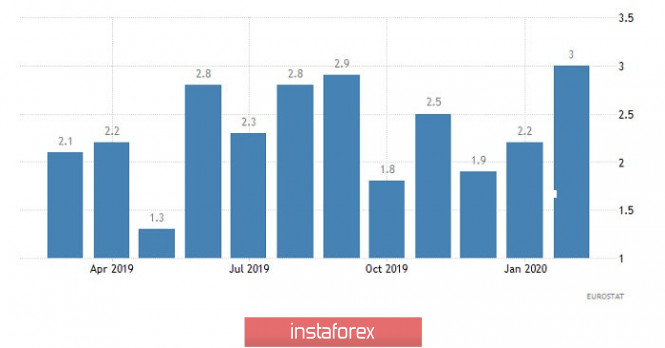 The US data are absolutely frightening. Against the background of an unprecedented increase in the number of applications for unemployment benefits, the jobless rate was expected to rise from 3.5% to 4.0%, and it climbed to 4.4%. The number of jobs should have been reduced by 150,000, but in fact it decreased by 701,000. So the scale and speed of changes in the labor market have a kind of terrifying appearance. Nevertheless, the dollar steadily strengthened. And in many ways, the same story with the cargo ship with medical protection equipment, which was supposed to go to Germany, and came to the United States, explains everything that is happening. Large investors prefer to keep their money where it can be protected. And the United States has clearly shown that its own interests, and security, are put above all else.

Number of new jobs created outside of agriculture (United States): 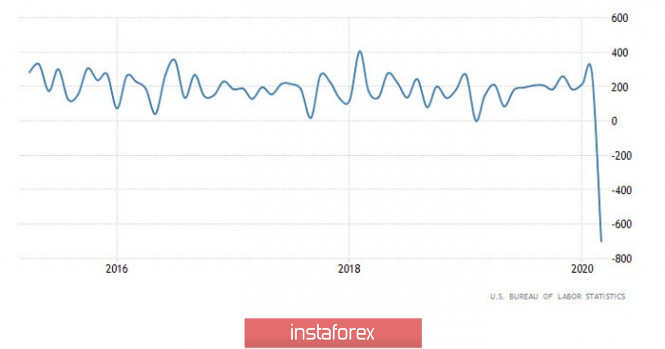 Macroeconomic data that is set to be published today will not affect the market. So investors will focus on the situation with the coronavirus. And strangely enough, this may negatively affect the dollar. Europe may be the most affected by the epidemic, but only as a whole. If you look separately by country, it is the United States that is the most affected country. Moreover, in Italy and Spain, it seems that the peak has already passed, and the number of new cases of coronavirus infection has gone down. Moreover, after such a long strengthening, the market still suggests a small rebound. So the single European currency, even if a little, will still grow.

From the point of view of technical analysis, we see a downward movement during which the quote managed to pass more than 300 points and reach the periodic level of 1.0775. In fact, we managed to work out more than half of the previous inertia, where there are not so many points left to the local low.

In terms of general analysis of the trading schedule, there is a characteristic sequence of inertia, which extends from the beginning of the new year. Regarding trends, we see that all the recent fluctuations, regardless of their scale, were in the main downward trend.

We can assume that the 1.0775 level will restrain sellers for a while, where during the initial pullback, the quote will be able to head towards the values of 1.0850-1.0900, where a slowdown with a subsequent return to the pivot point is not excluded.

From the point of view of complex indicator analysis, we see that the hourly and daily periods signal a sale due to the steady downward course of the past week. 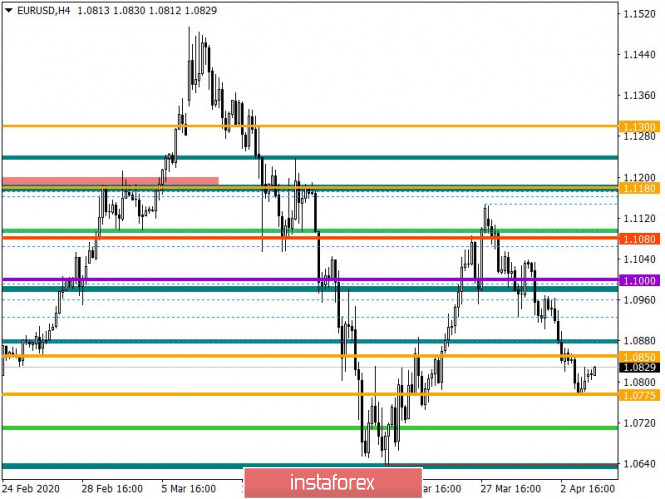 Hot forecast and trading recommendations for EUR/USD on May 26, 2020
Trump's statement from yesterday must be seen in two ways. First, the fact that he did not mention the "Hong Kong issue" may indicate behind-the-scenes negotiations with Beijing - in that case, the emotional tweet of the US president (and he doesn't have others) could destroy certain diplomatic.
Hot forecast and trading recommendations for EUR/USD on May 25, 2020
Continuous holidays, now in Europe, now in the United States, made the market incredibly boring, although on Friday there was a short moment of recovery
Hot forecast and trading recommendations for GBP/USD on May 22, 2020
The market ignored data on the labor market, as it was simply tired of the endless stream of bad news, and preliminary data on the indices ...
Show more
Close