Analysis of EUR/USD and GBP/USD on April 6. Demand for US dollar remains high despite depressing reports from US 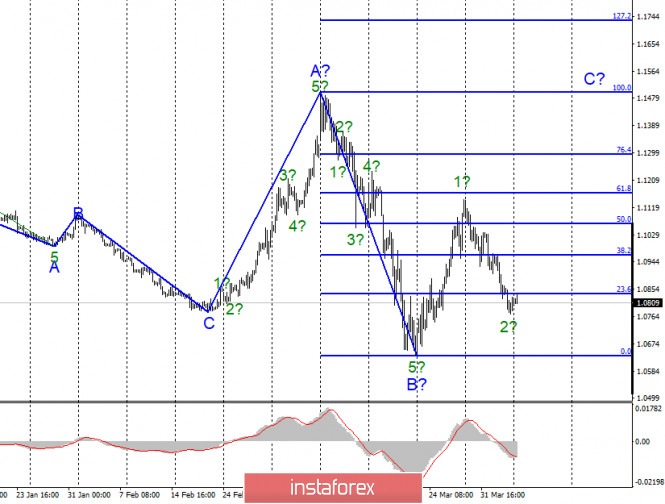 On April 3, the EUR/USD pair lost about 50 basis points, and continued thus to build a prospective wave 2 as part of the future C. If this assumption is true, then the instrument will begin to increase quotes today with targets located above the peak of wave 1. On the contrary, further decrease in the quotes of the instrument will cast doubt on the readiness of the markets for new purchases and, most likely, will require additions and adjustments to the current wave marking.

On Friday, the news background for the EUR / USD instrument was very strong. On the morning of April 3, reports on business activity in the services sectors of Germany and the European Union were published. There were no surprises here, both indicators decreased significantly compared to February, as the service sector suffered the most due to the introduction of quarantine measures worldwide, not only in the EU. US news and reports were even more important. The unemployment rate in March jumped from 3.5% to 4.4%, the number of new jobs created outside the agricultural sector amounted to -701K, which has not happened in 10 years (even a negative value for this period was recorded only once). Meanwhile, the Markit services business activity index was 39.8, slightly better than market expectations, and the ISM business activity index was unexpectedly 52.5, which is a fairly high value, especially in the context of the worldwide pandemic of the COVID-19 virus. However, the fact remains that, according to ISM, the US services sector was almost not affected in March by the epidemic and quarantine measures. It seems a little strange to me, but in any case, demand for the US dollar remained high on Friday. Therefore, all absolutely depressing reports from America had no effect on the mood of the markets. Despite the fact that the shock state of the markets is gradually passing, as we see, the markets are not particularly interested in statistics now. So the topic of the epidemic remains topic number one and markets trade solely on their own grounds.

The euro-dollar pair presumably continues to build the rising wave C, which can turn out to be very long. The internal wave structure of this wave can take a 5-wave form. I recommend buying the instrument again in order to build wave 3 inside C after receiving the MACD signal "up" with targets located near the levels of 1.1165 and 1.1295, which corresponds to 61.8% and 76.4% Fibonacci. 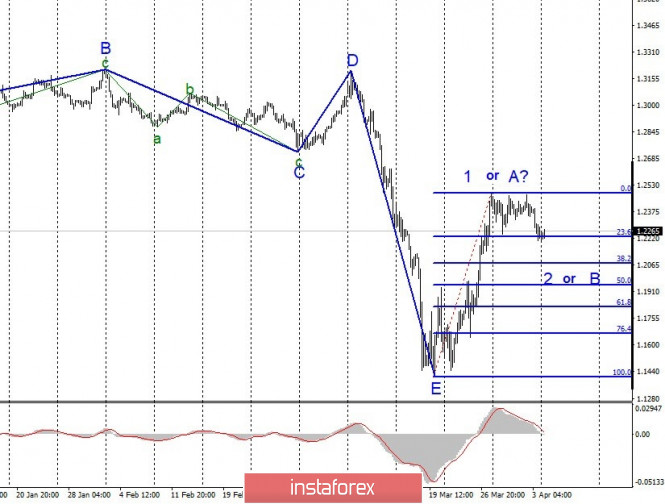 On April 3, the GBP/USD pair lost about 130 basis points. Thus, the construction of wave 2 or B has probably begun. If this assumption is true, the price will continue to decline with the purposes located about 38.2% and 50.0% Fibonacci grid constructed sized wave 1 or A. On Monday morning, trading on the instrument showed sellers were weak, as an attempt to break through the 23.6% Fibonacci level failed. Thus, wave 1 or A may try to complicate its internal structure.

The news background for the GBP / USD pair on April 3 was also quite strong, and the market reaction to it was also the opposite of the nature of the news. In the UK, a completely neutral index of business activity in the services sector was released that day, which turned out to be slightly worse than market expectations - 34.5. All other news came from America and they were already talked about a little higher. Everything related to the euro-dollar instrument applies to the pound-dollar too. The news background was supposed to lower demand for the US currency, but it increased it instead which is a complete mismatch. Today, April 6, there will not be a single economic report in the UK, the EU and America. The amplitude of trading may be low.

The pound / dollar instrument supposedly completed the construction of the first rising wave. Thus, now, I recommend selling the pound in the calculation of building wave 2 or B with targets located near the calculated levels of 1.2072 and 1.1944, which corresponds to 38.2% and 50.0% Fibonacci, but after a successful attempt to break through level of 23.6%.