Since March 18th, an upward wave model has been forming on the British pound's chart. The price has been in the correctional phase since the end of March. At the moment, the correction is finished. The quote hit the upper board of the pre-completion zone. There are no reverse signals on the chart.

The pair has made an attempt to break the support level. That is why, during the upcoming trading sessions, GBP/USD is likely to change its trend and move up to the resistance level. However, the quote may return to the current levels. The pound/dollar pair can also show a drop.

It is recommended to buy the British pound within the intraday trading. Once the correctional phase is completed, traders can enter the market. 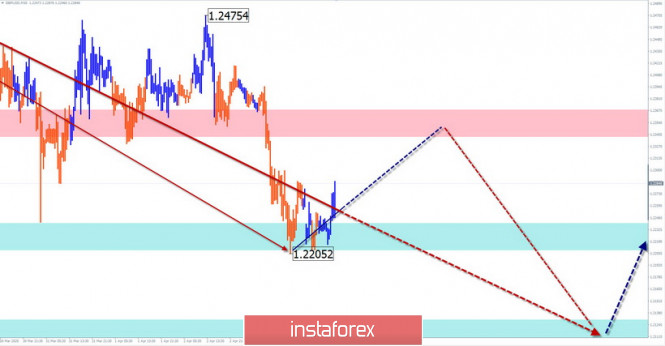 Since March 9th, the Japanese yen's trend has been shaped by the ascending wave. Analysts have noticed its first two parts (A-B). An upward trend, that started in April, is the beginning of the final part (C). The price reached the lower board of the strong large-scale resistance.

During the upcoming trading sessions, the dollar/yen pair is expected to finish its upward movement. The pair will reverse and start falling. The downward movement may be stopped by the support level. The pair can start gaining ground only tomorrow.

Today, it is better not to open buy positions on the pair. Traders can initiate short-term sell positions of a small size withing the intraday trading. It is safer to avoid trading while the pair is dropping. Analysts expect buy signals at the end of the downward trend. 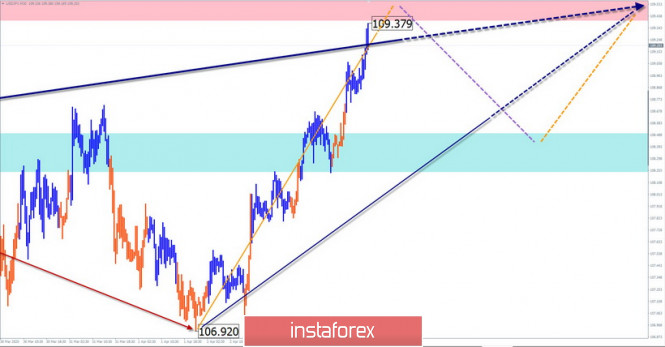 Explanation to the figures:

The simplified wave analysis uses waves consisting of 3 parts (A – B – C). The last incomplete wave is analyzed. Arrows indicate the formed structure; the dotted background shows the expected movement.

The wave algorithm does not take into account the duration of tool movements over time.