Burning forecast for GBP/USD on Ma 19, 2020 and trading recommendation

Usually, nothing important happens on Mondays and the market behaves quite calmly. However, yesterday something really strange occured. Before the beginning of the American session, the greenback started losing ground against all world currencies. The US dollar stopped falling only closer to the end of the American session. Moreover, the pound was among the leaders in terms of growth. The reason was oil. There is an inverse correlation between the greenback and oil which manifests itself at the time of a sharp and strong change in the value of petroleum. Yesterday, oil increased sharply amid the news that oil consumption in China was returning to pre-coronavirus levels. In combination with Saudi Arabia's plan to further reduce oil production it led to a rather strong increase in oil prices and a steep fall in the US dollar.

Nevertheless, it may be short-lived. Indeed, strong fluctuations in oil prices are needed for this correlation to take place. It does not happen every day. Thus, the situation in the oil market is only able to bring a certain temporary variety into the foreign exchange market. However, in order to change the general trend, this requires some serious changes in the United States. As for the British statistics, in April, the number of applications for unemployment benefits increased by a record 856.5 thousand which was the worst result in history. Similar events took place in February 2009. Back then the number of applicants for the benefit amounted to 142.8 thousand. Moreover, the pound does not show any signs of a rapid decline since the data on applications is somehow balancing the unemployment rate which suddenly fell from 4.0% to 3.9%. Unemployment data, unlike applications, is not for April, but for March. It is clear that the unemployment rate will significantly increase. In other words, the medium-term outlook for the pound is a downward movement. A decline in unemployment amid a sharp increase in applications for benefits is likely to raise questions. Even those market participants who have not yet paid attention to the fact that the data is for different months will eventually start asking uncomfortable questions. The thing is that strange incidents with statistics on the UK labor market are caused by the closure of employment service centers in mid-March due to restrictive measures amid the coronavirus epidemic. People who lost their jobs simply had nowhere to turn. Judging by how the data on applications changed in April, the situation with the work of social services has somewhat improved. Thus, the growth of the pound is likely to end in the near future. It will be replaced by a downward trend. 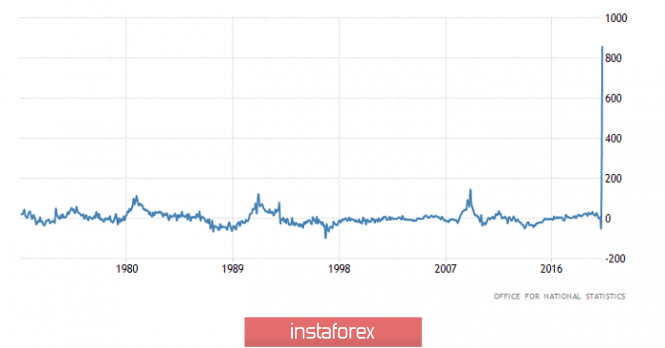 In terms of technical analysis, we see the price reversal from the local minimum of 1.2070 where the quote has found a point of variable support recently. The existing inertia returned the market participants to the values of May 14-15. Is it better not to consider the existing movement as a signal of a broken downward trend, since the surge in long positions plays a temporary role in the market.

Analyzing the trading chart in general terms, the daily period, it is preferable to fix a breakout of the low as of April 7 (1.2166) which signals a predominant downward sentiment.

It can be assumed that the activity of long positions will gradually disappear which will return the quote to the point of recent support. Regarding resistance levels, you should pay attention to the levels of 1.2250 and 1.2350 which are currently closest to the price.

From the point of view of a comprehensive indicator analysis, we see a local upward trend on the minute and hour time frames caused by a surge in activity. Daytime periods invariably maintain a downward sentiment focusing on the main movement.

Hot forecast and trading recommendation for EUR/USD on June 1, 2020
Discrepancies in US data, along with protests that have already developed into full-fledged clashes with the police, are clearly not conducive to strengthening
Hot forecast and trading recommendations for EUR/USD on May 29, 2020
It seems that the market is gradually returning to normal and is increasingly responding to published macroeconomic data, which may negatively
Outlook for EUR/USD on May 28th, 2020. Trading recommendations
The single currency was boosted by the announcement of a new plan of the EU economy support. However, some time later, market participants focused on the prospects.
Show more
Close