In June, the President of the European Central Bank (ECB), Christine Lagarde, said that MiCA II, or additional European regulations of the cryptocurrency market, "should regulate activities involving staking and lending of cryptocurrencies." Now she's back on the subject.

Christine Lagarde once again called the regulation and supervision of cryptocurrencies an "absolute necessity". In her opinion, this process - i.e. market regulation - should accelerate especially after the collapse of the FTX cryptocurrency exchange.

During a November 28 hearing before the European Parliament's Committee on Economic and Monetary Affairs, Lagarde cited Facebook's Libra as an example of the ECB's commitment, which "helped to stop some players" from entering the cryptocurrency market. However, she said that the situation with FTX was more about "stability and reliability of the stock exchange. He adds that the ECB needs to strengthen its role as a regulator to respond to people's growing interest in digital assets.

"At least Europe [on regulation] is ahead of the rest," the ECB president said. "But as I said before, it is one step in the right direction. It's very much needed," she added.

Despite the fact, that the intraday technical support located at the level of $1,174 had been broken, Ethereum has reversed all the yesterday's losses and is trading back close the recent local high around $1,231. The intraday technical resistance is located at $1,231 and $1,1288. The momentum is back to the positive territory, so the move up is backed up by bulls. Please notice the fact, that Ethereum lost more than 37% in November alone as the crypto winter continues and any up move should be considered as the upward correction during the long-term down trend. 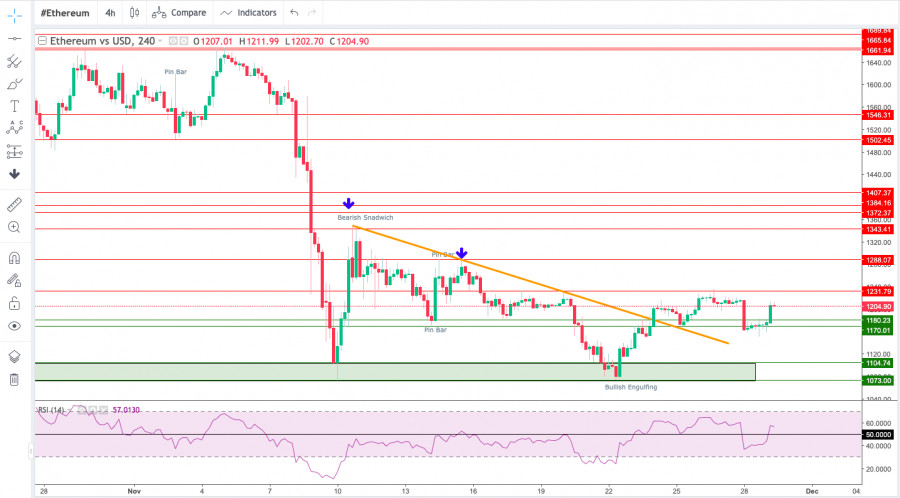 Bitcoin has made no real progress since yesterday. Price continues to move sideways around $23,000 as price is hovering above the short-term support trend line at $22,600-$22,700. Short-term oscillators suggest

Bitcoin consolidates near $23k with falling buying volumes: what to expect next?

The bullish trend of Bitcoin continues to weaken, and the asset is increasingly moving towards consolidation. Over the past two weeks, the cryptocurrency has made three false breakouts above $23k

BTC update for February 07,.2023 - Rejection or breakout of trading range

Technical analysis: BTC/USD has been trading sideways at the price of $22.900. Watch for potential rejection or the breakout ot he downside. Trading recommendation: In case of the rejection

Technical Analysis of ETH/USD for February 7, 2023

Crypto Industry News: It has been known for a long time that the police and services often lag behind criminals when it comes to using new technologies. It is possible

Technical Analysis of BTC/USD for February 7, 2023

Crypto Industry News: With the reopening of China's economy after nearly three years of Covid stagnation and paranoia, the HangSeng tech index has surged, and there are many indications that

Litecoin has completed the minor correction from 102.39 and is now headed higher towards the next targets at 104.96 and 107.82. Longer term we continue to look for much higher

673
Can't speak right now?
Ask your question in the chat.